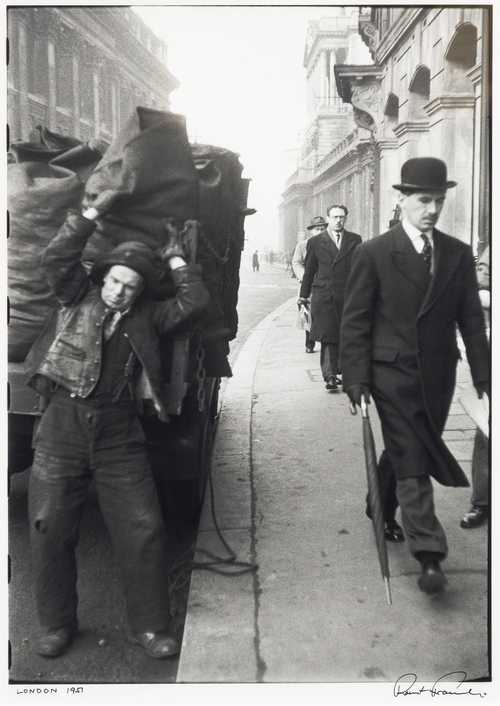 "There is strange you can tell London in a man's suit. Why is London such a wonderful place that it will speak to you even in a piece of cloth?
(Richard Llewellyn, How Green Was My Valley)

The social contrast between miners and bankers is what preoccupies Frank in his London/ Wales Series: "Robert Frank's photographs... document a small corner of our history but they also set forth the struggle and spirit that defines the character of a place and its people. His expressive combination of chronicle and testament in this work opens a doorway through which to view that spirit." (Philipp Brookmann quoted in Brookmann 2003, cover text). On the left, with both feet on the road, a delivery man hauls a heavy sack of coal from a vehicle directly onto his head. The man wears typical work clothes, which are already dirty and slightly damaged, and the eye is particularly drawn to the hole in his trousers at the height of the right knee. On the right of the picture, on the pavement walks a well-dressed banker, again typical, with a moustache, bowler hat, shirt and tie, suit, patent leather shoes, overcoat and gloves, holding an umbrella in his right hand and an envelope in his left. His gaze is introspective and he stares at the ground, as if he does not wish to register the world around him. In the background, further elegant gentlemen can be seen, coming towards us. The two very different personalities, the worker and the businessman, are separated by the curb, which runs from the foreground down the centre and curving into the distance towards the right. We are in 1950s London. After the war, the economy recovered, industry was again functioning, and the mining sector was booming. The two figures which Frank spontaneously captured here, could not be more different. Both go about their daily job, one physically, the other psychologically burdened. They both live in their world, and just as they are separated by the pavement edge, so they live in different social contexts and would never talk to one another. That was not done.