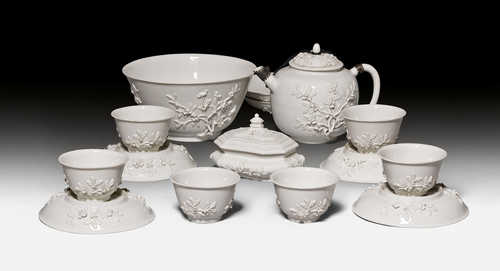 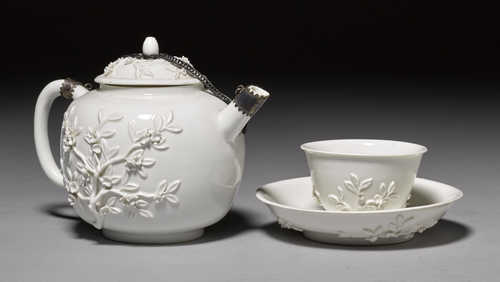 The fashion of tea drinking, which at first only prevailed in the higher social circles, required the provision of appropriate tea services. Böttger, who was fundamentally opposed to East Asian porcelain and declared it to be clumsy ("plumpe facon ") as well as having absurd painted decoration ("absurde Deseins ihrer Mahlerey "), only accepted it in wares required for tea, coffee and chocolate drinking (" Thee, Caffé und Chocolate-Drinken benöthigten Geschirre"). According to him, these were the only items for which, through long practice, the Asian craftsmen had learnt to do a fairly good job ("Das einzige, welchem sie durch die sehr lange Übung endlich eine ziemlich gute Arth zu geben gelernet [hätten]"). The tea service pieces are decorated with "Irmingerschen Belegen". The models for these relief-decorated pieces can be found in East Asian wares which were known to Böttger’s employees through the Elector’s extensive collection of East Asian porcelain at the Dresden residence.

Jacob Irminger (born probably in Zurich 1635 - 1724) was responsible for the modelled decoration of the early Meissen period. Böttger himself had suggested to the Dresden court that the goldsmith be given the role of Director of Design. Evidence of this can be found in three staff lists from 1710. He was mainly responsible for the artistic design of the Böttger stoneware and the Böttger porcelain.