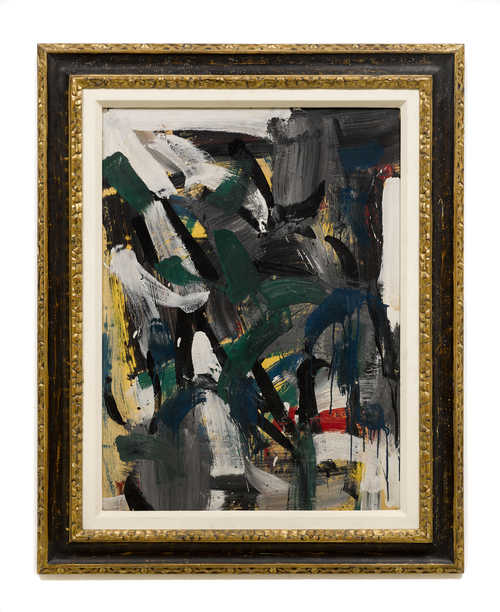 The French-Canadian painter and sculptor Jean-Paul Riopelle is today regarded as one of the most important representatives of Abstract Expressionism and Action Painting and one of the few artists in Canada to have made a breakthrough internationally.

Born in Montréal in 1923, Jean-Paul Riopelle began by studying mathematics, which he soon gave up in order to dedicate himself fully to his true passion, painting. Between 1942 and 1945 he studied at the École des Beaux-Arts and the École du Meuble in Montréal. He studied under the French-Canadian painter Paul-Émile Borduas, who was the founder of the artist group “Automatistes”. The young Riopelle got on well at the school, led by a spontaneous style of working, in the footsteps of the Surrealists and the Expressionists in opposition to the established social, traditional and religious structures. In 1947 he left Montréal in order to move to Paris, the meeting place for countless artists. There he frequented the most important representatives of Informel art as well as Tachisme and came into contact with the contemporary art of the time, French Surrealism. He set out in search of his own style and found this in Action Painting, led by his controlled but still spirited painting style.

To begin with, he put into practice the technique of Action Painting in its purest form, by dripping oil paint on a picture surface. From the 1950s his style changed, and, in the manner of Jackson Pollock’s “All Over Painting”, using a spatula and with a voluminous, wide chromatic range, he began to distribute the paint over the whole picture surface and to form elongated paths. The work presented here from 1958 is a good example of this important period in the artist’s oeuvre. Following on from this still somewhat free style of painting, he began to give his works a grid-like structure. The tracks of the spatula became narrower and mosaic-like arrangements began to appear.

Our painting from 1958, is filled with the vitality of high resistance energy and colour spaces. It speaks wonderfully of Riopelle’s “Informel” expressiveness. Painting itself is his pictorial theme, the progression of the applied colour and the colour shapes appear to be the content of this work. The strong colours resolutely and somewhat dramatically share the given space of the canvas. As is characteristic of Jean-Paul Riopelle’s oeuvre, our work has no real composition or even an optical centre, no beginning and no end. It is as if the colour structure pushes out beyond the edge of the picture.

His works are reminiscent perhaps of landscapes, with the structured dynamics evoking fields or forests. For Riopelle it was very important not to abstract an experience of nature, but rather, to find a way back to nature through his artistic work.

George Duthuit writes on Riopelle’s work: “Characteristic for Riopelle is his feeling for the seasons. After the suavely festive outpouring of Spring, the clamour of corn reddening to the scorch of Summer, of charred meadows and night-dark azure, the yawing hush of gorge and cavern in the sere and yellow Autumn, after these why not now, when winter’s joys are over, the throwing jewels of floe and berg and icicle and dawn like thousand caskets split?” (From: Exhibition Catalogue “Jean-Paul Riopelle: Grangs Formats 1952/75”. Pierre Matisse Gallery, New York, April 1977)

At the 1962 Biennale in Venice Jean-Paul Riopelle received the UNESCO prize for his work; in 1958 he received the Guggenheim International Award; he participated twice as a guest at documenta in Kassel, as well as in numerous exhibitions, and his works are to be found in well-known art institutions.