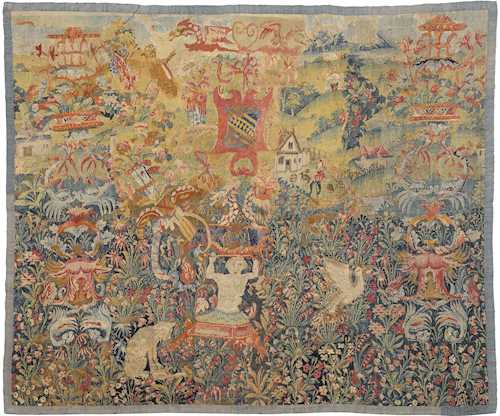 Flemish, Bruges, probably 2nd half of the 16th century.
Depiction of a fantasy landscape with flowers, animals, grotesque faces and a figure of Atlas and a coat of arms suspended from a band. In the background: landscape with a farmhouse. Faded, some losses and repairs.
136x166 cm
Provenance:
from an exquisite private collection, Ticino.

With an expert opinion by Prof. Guy Delmarcel. Boechout 2019.

The tapestry fragment on offer here represents a section from a wide landscape, also called "millefleurs" because of the many flowers in the lower part. It is a fragment from a larger tapestry.

Although the tapestry does not bear a mark of any manufactory, it can certainly be attributed to an undefined Bruges Manufactory. The Bruges Museum contains fragments with the coat of arms of Charles V on a floral background (Gruuthuse Museum, Inv. 0.1.XVII).
Numerous such coat-of-arms tapestries from Bruges production were delivered to Italy. Because of their longitudinal format, they are called "dorsalia" or "bancalia" because they often hung as a background behind benches or seating groups.
Our fragment is best compared to two millefleurs tapestries with coats of arms hanging in the Episcopal Palace of Mantua. The ornaments in the central field are almost identical. The exact date of origin of this tapestry has not yet been identified. They could have been part of an order for the Studiolo of Isabella d'Este in the period 1496-97, wife of the Marquess Francesco II. But it is also possible that they were ordered by their son, Duke Federico II (died in 1545), who according to his inventory had numerous such tapestries in his possession.
The coat of arms refers to the Venetian noble family Trevisan, more precisely to Andrea Trevisan (died in 1534), who was the Ambassador at the English court of Henry VII and who stayed in Bruges for a while in 1497. However, an exact assignment of the coat of arms is not possible.