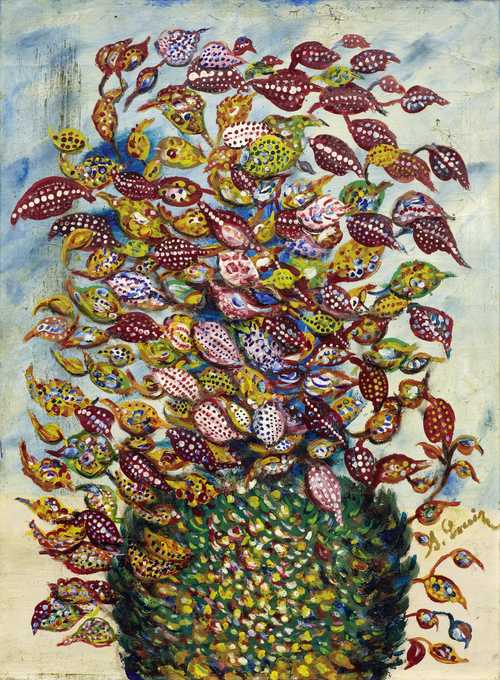 Only since 2009, when director Martin Provost dedicated a successful and award-winning film to the artist, simply titled "Séraphine", has she become recognised again by a wider public. Her biography reads like the perfect film script. A cleaning lady living in very poor conditions in Senlis, France, enjoys painting and is serendipitously discovered by the famous art dealer Uhde. He is deeply moved by her works and thenceforth promotes her by providing her with materials for her painting.

She was always considered eccentric in her village. She heard voices, felt called to paint in the name of the Mother of God, and prophesied of the coming Apocalypse. The important exhibition of five naïve painters, organised by Wilhelm Uhde in 1928 in the Galerie des Quatres Chemins, likely bore the name "Les peintres du Sacre Coeur” (The Sacred Heart Painters) due to her influence.

Floral still lifes represent the artist’s most important motif. The depicted flowers are actually fantasised to represent as much vitality as possible. The present work serves as an outstanding example of Séraphine Louis’ artistic vocabulary, the entire composition vibrating with life.

In the artist’s monograph, Hans Körner and Manja Wilkens describe the uniqueness of Séraphine Louis' still lifes in reference to the present work: “that the impression of a vegetabilisation of the vessel [. . .] is not an arbitrary association, is confirmed by a large bouquet of flowers formerly in a collection in Neuilly [the work offered here]. The loosely set leaves of the bouquet can hardly compete with the dominant vase. The vase itself is dotted with small splashes of colour, which may assume the form of small colourful leaves. The contour of the vase is agitated; silhouettes of leaves become apparent rather than the vase wall. Somewhere between the vessel and the tuberous thickened stem, this structure has its place" (Op. cit. p. 105).