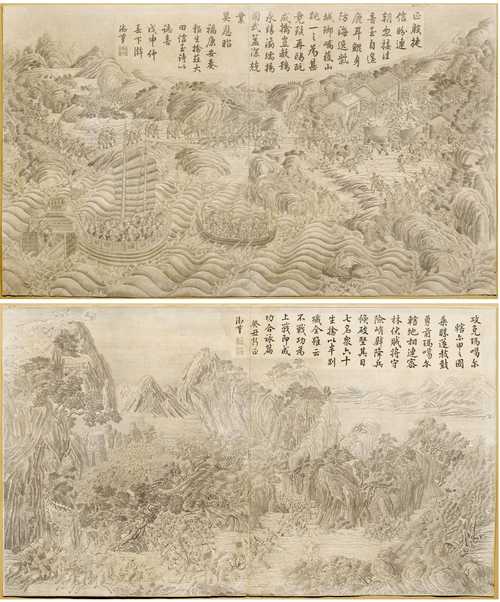 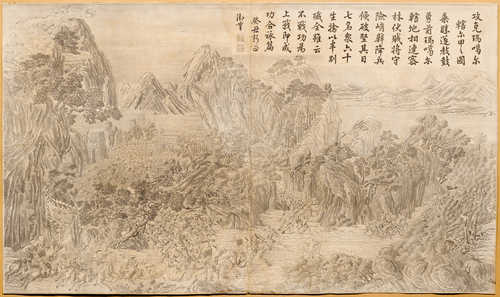 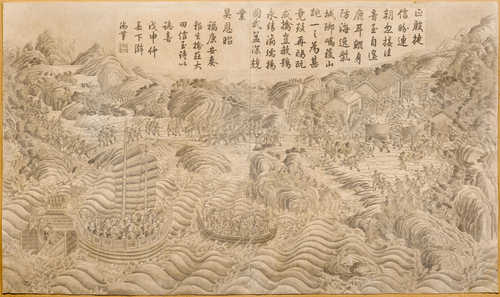 China, Beijing a) ca. 1793 b) 1789/90.
a) Rare print from a series of eight copper-plates commissioned by the Qianlong Emperor to commemorate the victory in 1792 of his campaign against the Gurkhas (Nepalese). b) Boat scene entitled "Capturing Alive Zhuang Datian" from a series of twelve copper-plates with detailed scenes from his campaign against Taiwan (1786-1788). The Chinese text in Qianlongs handwriting were later added by woodblock printing. (2)
This kind of Chinese prints were inspired by European battle prints, which had been brought to China by the Jesuits or sent as imperial gifts from European courts. In 1765 the Qianlong Emperor ordered prints commemorating his recent victories against the Zhungar troops. Drawings made by Jesuit court artists, including Giuseppe Castiglione, were sent to Paris to be engraved and printed in the royal workshop of Royal Engraver Monsieur Cochin Beauvais and then sent back to China, along with the plates and prints. Subsequently, Chinese artists were instructed to produce copper engravings of further Imperial victories, as the ones above.