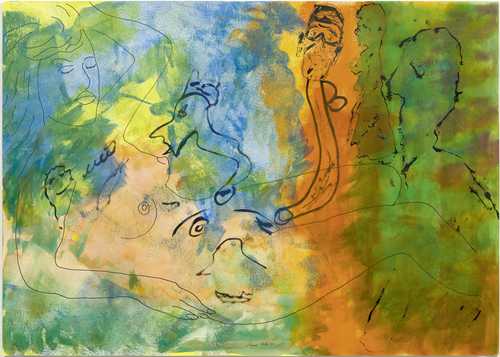 Provenance:
- Exchange between Sigmar Polke and the Swiss artist Fred Engelberg Knecht.
- Galerie A16, Zurich.
- Purchased from the above by the present owner, since then private collection Switzerland.

Sigmar Polke always refused to be classified, whether stylistically or in his choice of material. Entering the scene as the German answer to Pop Art in the 1960s, Polke’s oeuvre, with its complexity and wealth of associations, eludes any connection with a particular style. Rather, Polke was a chameleon, alchemist and satirist, who, with humour, refined pictorial ideas and a fine sense of the crises of the time, decisively influenced German Post War painting. The transformative potential of materials is thus one of his consistent themes, set against a background which questions the meaning of painting. His love of experimentation with various types of fabric, minerals and chemicals, with printing techniques, photography, political as well as art historical references, became as much a hallmark of his work as his wit and irony. For all the jokes and experiments, however, Polke was always concerned with the role of art, the role of the artist – also within society. Into the elitist, hermetic sphere of art, he allowed the entry of triviality on a large scale (das grosse Triviale) as Benjamin H. D. Buchloh once entitled an essay on Polke.

After doing a glass-painting apprenticeship, at the beginning of the 1960s Sigmar Polke studied under the Informel artists Gerhard Hoehme and Karl Otto Goetz at the Dusseldorf Kunstakademie. The revolutionary “happening” in 1963 “Living with Pop – a Demonstration for Capitalist Realism” which he carried out together with fellow artists Gerhard Richter and Konrad Lueg in the Dusseldorf furniture store Berges, still resonates to this day. Despite choosing this as his departure point, he developed his creative potential in all directions and today he is considered one of the most important artists in Germany.

His use of ironic play and at the same time his unconventional aesthetic allure, is showcased in the “Pour Paintings”, of which our Lot 3515 is an example. This series of works from the 1990s in which Polke distributes the paint by dumping and blowing it over the surface, gives high priority to the element of chance in the making of a picture. Laid out in several layers of paint, and run through with fine spontaneous lines, an autonomous pictorial space is formed, which in material as well as conceptual terms illuminates the artist’s creative process. Sigmar Polke’s use of the felicitous playful alternation between abstraction and the figurative finds a counterpart in the work of his artist friend Gerhard Richter, who also uses both forms of expression: with both artists the dogma of the reproduction of reality is ruptured.

Lot 3512 in our auction, which was produced at the same time, illustrates the turn to the figurative without abandoning the abstraction of the colour space. Alongside the reclining female nude, Polke himself appears in a reduced self-portrait, flanked by additional figures, some of which are only hinted at. In this extremely strong, multi-layered work, which is rich with associations, Polke’s sharp humour is combined with his experimental creative process. The sexually charged scene is constructed against a colourfully abstract background, the reclining figure is a reference to the classic modern period, and the theme of “Artist and Muse” is presented with a wink.

These two works found their way to Switzerland through one of the many barter exchanges which Polke carried out with artists and gallery owners in this country. Fred E. Knecht, who received these works from Polke, was a politically engaged artist, who packaged his critiques in irony and magic realism, and presumably incorporated these works into one of his legendary cabinets of curiosities.