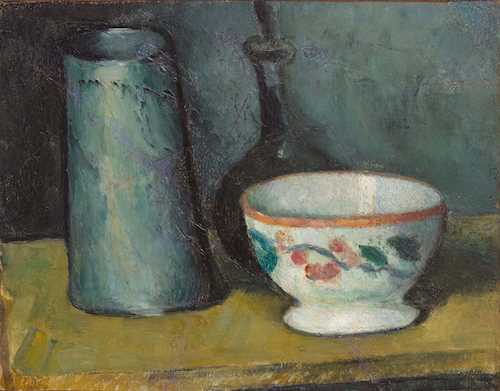 The months from April 1879 to March 1880 Paul Cézanne spent with his wife Marie-Hortense Fiquet and their son Paul in Melun, a small town situated on the River Seine near the forest of Fontainebleau. Forced to stay in the house due to the extremely cold winter, Cézanne turned to still lifes and created around 20 paintings in a few months. The new means of expression that Cézanne had advanced in the previous year during his intensive engagement with plein-air painting in L'Estaque, he now developed further in the still life. This series, which includes the work offered here, is one of the most important phases in Cézanne’s development.

As Eilza Rathbone affirmed, “These works culminate a decade of extraordinary development and change in his work and may be seen to mark a critical turning point for Cézanne—the transition from Impressionism to the mature style of his later years. […] In this series of paintings, Cézanne was with great deliberation laying the foundation of his future work, rearranging the same few elements to explore variations on a theme” (Impressionist Still Life, exh. cat., Phillips Collection, Washington, D.C., 2001, p. 118).

Many of the still lifes that Cézanne painted in the winter of 1879-80 feature the same blue-grey background characteristic of the artist, often decorated with foliate-patterned wallpaper. Objects or fruit stand on a wooden table. "Bol, boîte à lait et bouteille" must have been one of the first works in this series. While the wallpaper pattern is not yet present, it already shows the blue-grey background and the brown tone of the wood surface is rendered in a tight mesh of continuous diagonal brushstrokes, as in the other works.

In addition, Cézanne repeatedly used the same items for his still lifes. The white, floral-painted bowl, the pitcher next to it and the elongated glass vase in the background, which together form the centre of our still life, reappear in later works of this series as well as in a watercolour by Cézanne. Sometimes Cézanne took only one object into another picture, sometimes he combined the objects and added something else. It is clear that the positions of the respective objects do not occur at random, in fact Cézanne passionately enjoyed draping the cloth and consciously staging his vases, pitchers and fruit exactly as he wanted them.

The perspectival shifts that decisively shape Cézanne's subsequent work are already manifested in our still life. As we look at the painted, light bowl from a frontal view, we simultaneously look from above into the significantly taller jug on the left side of the picture. In this detail, as well as in the slight left tilt of the overall composition, Cézanne's detachment from conventional representation has already been established. Above all, his technique, his pictorial inventions and his experiments with perspective fascinated subsequent generations of artists, ranging from Picasso (“Cézanne! Cézanne was our father”) and Matisse (“[Cèzanne] a sort of god of painting”) to Jasper Johns, Per Kirkeby and A. R. Penck.

Cézanne painted a variety of works on small canvases, many of them still lifes. These usually show only a small group of fruit or, as in our case, objects. These small-format works can be regarded either as studies in which Cézanne depicted individual objects in order to later combine them into a larger whole, or as Henri Loryette explained the small canvases, "(…) Alternatively, they can be regarded as self-sufficient little pictures that, like Manet’s Asparagus, deliberately reject the contrivances visible in the larger works to showcase motifs so simple as to border on abstraction” (Cézanne, exh. cat., Philadelphia Museum of Art, 1995, p. 174).

In addition to the beautiful work offered here, there is a second version with very similar composition, yet not quite as attractive, located in the Bridgestone Museum of Art in Tokyo. Together with a second small painting, our work is the only still life from this series that is still in a private collection. The rest adorn the walls of the great museums in Paris, New York and Saint Petersburg. It is therefore a rare oppertunity—in any case Cézanne’s still lifes almost never come on the market, and never an oil painting showing only objects—to offer this beautiful, harmonious and self-contained painting by Cézanne at auction.