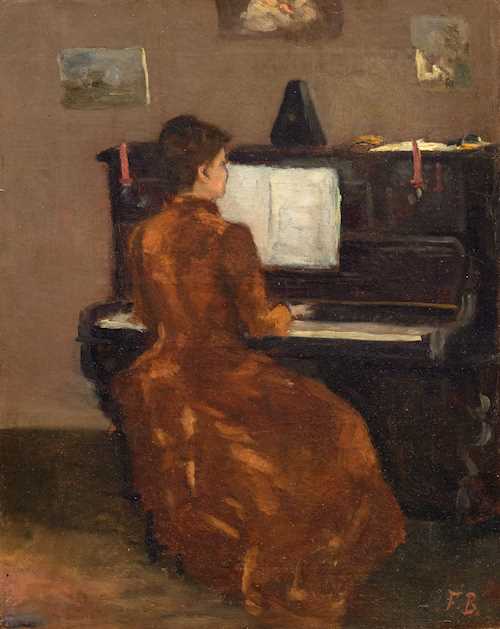 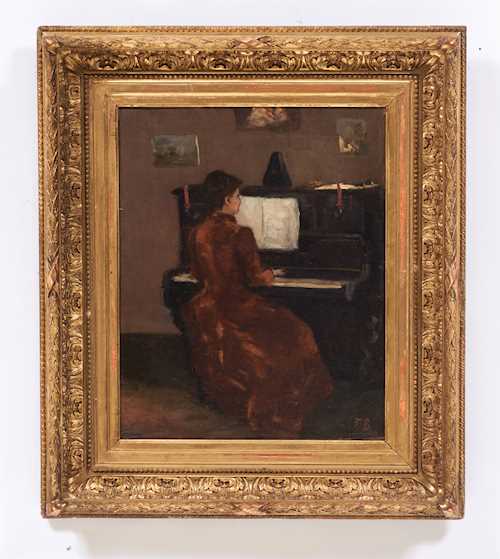 Regarded as a pioneer of modern painting, Frédéric Bazille was killed at a young age on the battlefield of the Franco-Prussian War. Inspired by his neighbour, the well-known art collector and patron Alfred Bruyas, Bazille discovered his interest in art, and together with Claude Monet and Auguste Renoir, became one of the most important figures of the early Impressionist movement in France.

After the artist's early and tragic death, his work was largely forgotten, as Bazille had not sold a single painting during his lifetime and had only exhibited on a few occasions, including at the Paris Salon. It was only through donations from his family and later sales by his heirs that his artistic talent was posthumously recognised. This is also demonstrated by the portrait of a young woman at the piano from 1866/67 presented here. Until it was sold to the Galerie Blot in Paris, it belonged to Thérèse des Hours, Bazille's cousin, and her daughter Henriette Auriol. Michel Schulman also suspects that the person portrayed in the present work is Thérèse des Hours.

In addition to painting, Bazille was a devoted music enthusiast, listening to the compositions of Hector Berlioz, Felix Mendelssohn Bartholdy and Giacomo Meyerbeer. In several letters to his parents, he reported on his musical passion and also on a portrait of a young woman at the piano that was, unfortunately, rejected at the Salon of 1866.

Michel Schulman, who confirms this painting as a work by the hand of the artist, concludes that it was most likely created in Bazille's studio, as indicated by the painting on the wall above the piano. This work, "Rue de village, Chailly" (Fig. 1.), was painted in 1865 in Chailly-en-Bière near Barbizon and is now in the collection of the Musée Fabre (Schulman, 1995, p. 125, no. 16).