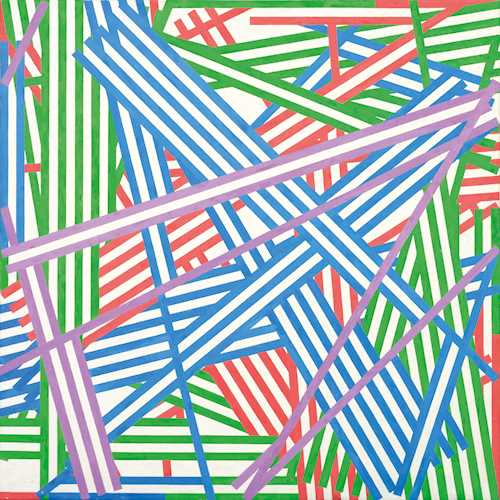 The work offered here by the British painter and sculptor Kenneth Martin represents a successful interplay of meticulous planning and chance. A pioneer of the Constructivist movement that emerged in England in the 1950s, Martin's œuvre is striking for its creation of spatial relationships between intersecting, overlapping geometric figures.
After completing his painting studies at the Royal College of Art, he initially devoted himself to portrait and landscape painting as well as design work. After two decades, the first abstract relief sculptures, mobiles and constructions were created in collaboration with his wife, influenced by Calder and Malevich, among others. Thus, the Martins belonged to the generation of British artists who, in the 1940s, recognized the importance of abstraction.

The "Chance and Order" series is drawn from a number of studies that Martin undertook after the death of his wife in 1969. It is based on the use of simple, harmonious, repetitive forms and an observance of mathematical progression and rules of proportion. A meticulously planned system of measurement underlies the characteristically colourful grid that unites the works in this series: Martin marks the starting point on paper, which is then rotated clockwise. Further lines are generated by randomly drawing two pairs of numbers at a time (from 1-25). In this way, a total of 8 pairs of numbers are generated for each work. The random selection of numbers creates start and end coordinates for each number line, randomly determining the length and orientation of each line. Here, the artist successfully alludes to the first element of the title, ‘chance’. Similarly, he draws on the component of ‘change’ through 90° rotations of the canvas. Repeated eight times, Martin creates a synergy between abstract nature and simultaneously planned structure (‘order’).

While the early works in the series follow a monochrome scheme, over the years the artist added additional powerful colours, thereby lending the paintings increasing complexity and visual impact. In the present work, for example, the colours violet, blue, green and red gleam in a symbiosis created by Martin, without relinquishing their self-sufficiency and their designated place on the canvas grid.

"With all these works there is a double invitation: to explore the drawings as statements about an inventive process; and to combine the produces that are generated by that process (...)" - Andrew Forge about Martin's work. (Forge, Kenneth Martin, Ex. Cat. 18 April - 17 June 1979, p. 52). Kenneth Martin – Chance Order Change II.1979.