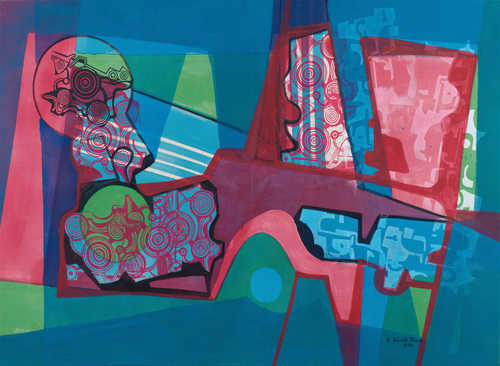 Roberto Burle Marx is one of the most well-known international landscape architects of the 20th century.

Born in Rio de Janeiro, he grew up in a progressive environment with his German-Jewish-Brazilian parents, who from early on encouraged their son’s artistic and musical talents. As a young student of painting, Burle Marx went on a cultural trip to Berlin with his parents in 1928, where, paradoxically, he came into contact with tropical plants at the botanical gardens for the first time. In the landscape architecture of South America up to that time, a strongly symmetrical European-influenced style was pursued. After his return from Berlin, Burle Marx turned to the architects Lúcio Costa, Le Corbusier and Oscar Niemayer and began to work on the landscape elements of their projects, although parallel to this he remained enrolled at the Escola de Belas Artes in Rio de Janeiro as a painting student. The specific stylistic feature of Roberto Burle Marx’s work, which comes through in both his sketches for gardens and in his painted compositions, is the break from strict symmetry in favour of a Cubist-driven aesthetic. It is no coincidence that his gardens are often said to be reminiscent of an abstract painting. Equally, and conversely, his paintings resemble architectural sketches. In this, however, we see his understanding of universal artistic practice, which knows no boundaries between individual genres.

Roberto Burle Marx’s interests extended far beyond his artistic practice and he enjoyed great recognition for his numerous achievements in the field of botany and as an environmentalist. In Sítio Santo Antônio da Bica, a country estate near Rio de Janeiro, which Burle Marx bought in 1949, he established an extensive landscape of exotic plants, which he bequeathed to the Brazilian state in 1984. His most famous international commissions include the wave-shaped structure of the Copacabana beach promenade (1970), the Biscayne Boulevard in Miami (1988–2004) as well as numerous roof gardens, including the house of Alfredo Schwartz in Rio de Janeiro (1932).

Until recently his artistic oeuvre was not well known, but in the last two years it has attracted much attention through a large touring exhibition. This retrospective exhibition was shown at the Jewish Museum, New York and the Deutsche Bank KunstHalle in Berlin, amongst other places. The pictorial work of Roberto Burle Marx is situated within the oeuvre of the avant-garde, but at the same time stands out as distinctive thanks to the prominence of his architectural achievement.