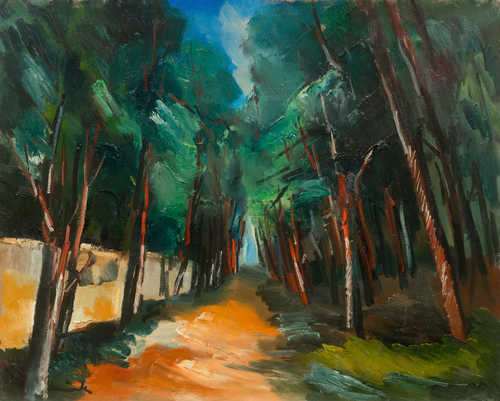 Provenance:
- Galerie Simon, Paris, no. 6122 (with label on the reverse).
- Otto and Helene Welter, Waldkirch, presumably bought in the 1920s.
- Private collection, Switzerland, by descent from the above to the present owners.

From 1907 onwards Maurice de Vlaminck increasingly spent more time in Paris. The greatest and probably most significant influence on Vlaminck's work after his Fauvist phase was undoubtedly the large Cézanne retrospective in 1907 at the Salon d'Automne in Paris. Vlaminck's art was strongly inspired by Cézanne's strong brushwork and his unique depiction of light. This influence can be seen in a distinctive adaptation in his work and is so strong that one speaks of Vlaminck's "Cézannesque phase". In 1908 Vlaminck's work underwent a radical change of style which, in addition to Cézanne's influence, also brought a new, darker palette of colours. The present work is a fine example of this intermediate phase. It foreshadows with its slightly darker colour palette, which is broken up with hues of bright orange, bright blue and rich green. The diagonal hatching, Cézanne's signature, is also evident in areas of this painting. It is also wonderful to see the ways in which Vlaminck announces his later, dynamic style. The movement of the trees, which appear to lean towards the road in the wind, and the overall slightly distorted depiction, lend the work a unique sense of space and depth.