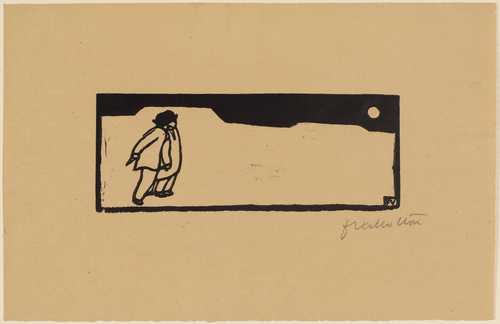 (Lausanne 1865–1925 Paris)
Les Fortifs. 1893.
Woodcut. One of only a few impressions. Signed lower right in pencil: fvallotton, as well as monogrammed in the block lower right: FV. Image 6 x 15.3 cm on vélin 16.5 x 25 cm.
We thank the Fondation Félix Vallotton, Lausanne, for the scientific advice for the following lots.

Catalogue raisonné: Vallotton/Goerg, no. 111 a.

At the age of 16, Félix Vallotton moved from his native town of Lausanne to Paris, where he completed his training as a painter at the Julian art academy. In order to pay his way, he did portraits of family acquaintances and initially kept a distance from the active artistic groups in Pont-Aven or the “Nabis” in Paris. He sent many of his works to the salons, who saw to it that he was introduced to publishers; he could therefore have followed the usual path of development. However, perhaps because of his difficult situation and motivated especially by his rigour and his artistic conscientiousness, from 1890 to 1900 he concentrated on his printed works.

Towards the turn of the century, Japan occupied a growing cultural and commercial significance in the Western world. Félix Vallotton saw in the Japanese woodcuts a release from the hitherto prevailing dogma of realistic compositions in Western printed art. The influence of Japanese woodcuts confirmed in him his sense of precision, the preference for the two-dimensional, the eschewal of perspective and the absolute concentration on the subject being portrayed. In a similar way to Japanese woodcuts, he works with dark and light blocks. He leaves no room for chance, and cuts regular, sharp and clean lines in the wood.

The extremely rare sheet “Les Fortifs” from 1893 is one of the most expressive examples of this, and powerfully combines all the aspects mentioned here.

Already in his lifetime Vallotton was a successful and highly regarded artist. His complex character was reflected in his varied and ambitious oeuvre, and fascinated his contemporaries. What is more, he influenced subsequent generations of artists considerably and is part of the most important artistic heritage of Switzerland and France.