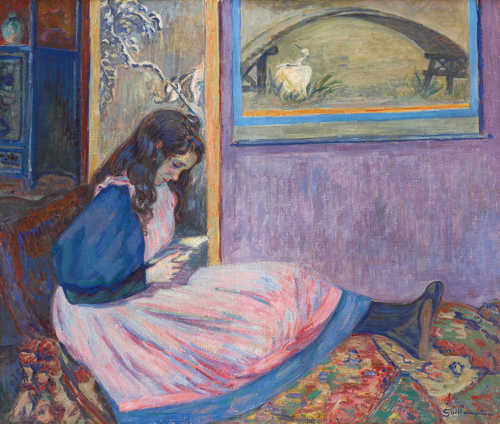 Armand Guillaumin was an Impressionist of the first and last hour. He studied with Cézanne and Pissarro at the Académie Suisse in 1866 and worked with them in Pointoise and Auvers-sur-Oise. He exhibited at the first (1874) and the last (1886) Impressionist exhibitions. In 1927 he died at the age of 86 as the last survivor of the Impressionists.

"La lecture" is one of the few portraits by Guillaumin and one of his most beautiful works. Usually rendered in pastel shades, they show Guillaumin's wife or one of his daughters reading or playing the piano. The painter evidently made use of these occasions of suspended concentration of his family members to create these impressive depictions, which are characterised by a particular sensitivity. This is also shown in the extraordinary technique (gouache on canvas).
In these scenes, Guillaumin attached great importance to the details, such as the patterning of the carpet. One is also able to see the way in which the Guillaumin family has surrounded itself with Asian decorations and representations. The so-called "Japonisme" craze strongly emerged in France in the late 19th century, especially among the Impressionists.

The provenance of "La lecture" is also very interesting: it belonged to Jack Aghion. A native Egyptian, Aghion was brother-in-law of the two Bernheim-Jeune brothers, as well as Félix Vallotton. He was a banker and had good connections in the art market, enabling him to acquire an important collection which also included very important works by Van Gogh, Boudin, Pissarro and Vuillard. The collection was auctioned at Hotel Drouot in 1918, where "La lecture" was No. 34, and where it was acquired by the family of the grandmother of the present owner. Originally from Strasbourg, she married and moved to Zurich in 1924, and the work, together with other important works of Modern Art, has hitherto remained with the family, not being presented to the public again until now.