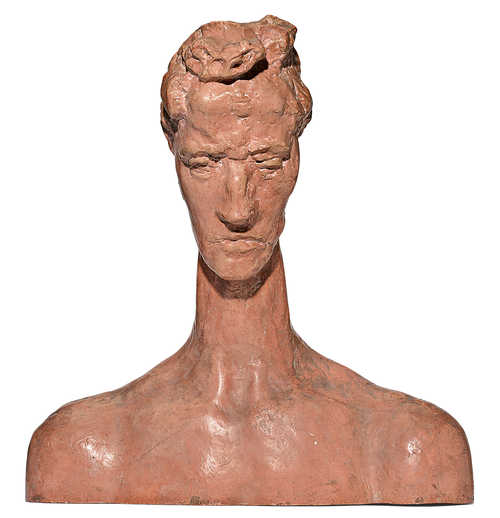 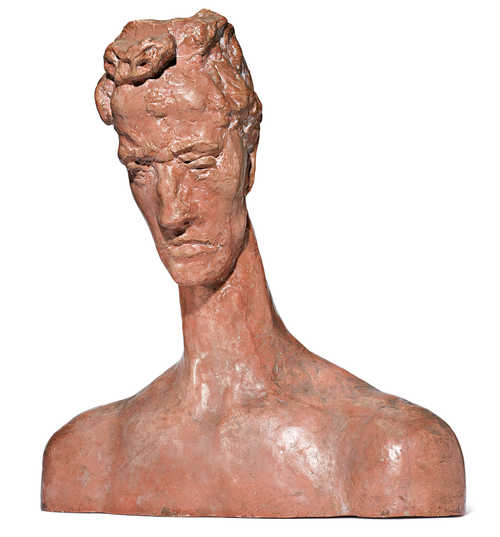 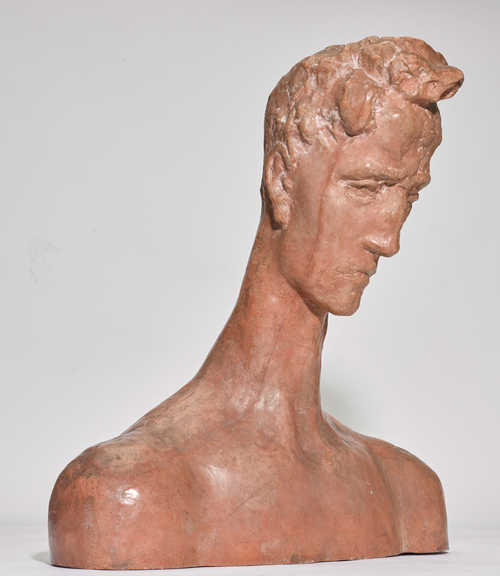 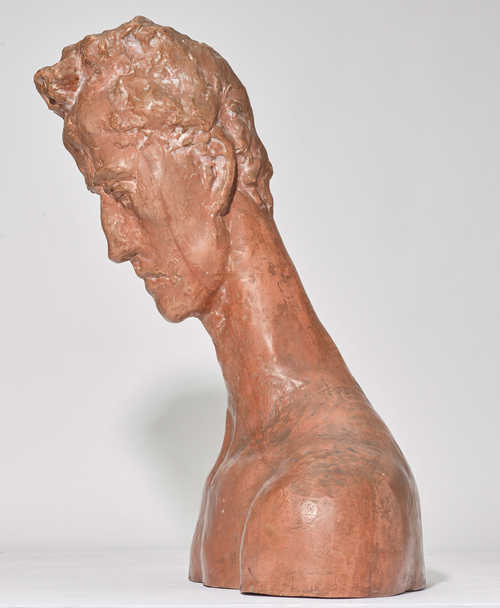 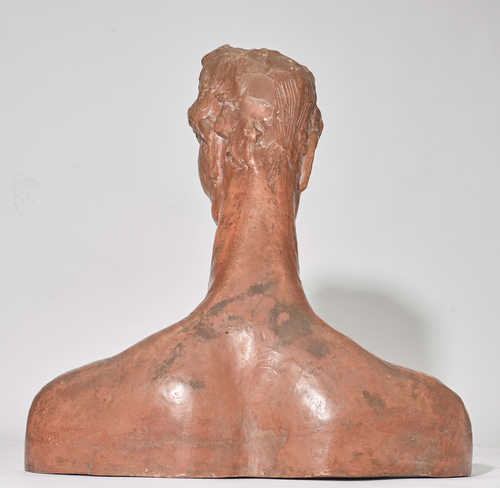 (Duisburg 1881–1919 Berlin)
Büste des Emporsteigenden Jünglings (Bust of the Ascending Youth). 1913.
Stone cast, lifetime.
Height: 53.3 cm.
We thank Prof. Dieter Schubert for his kind assistance and for confirming the authenticity of the work as well as its classification as a lifetime cast, University of Heidelberg, 14 April 2018.

Wilhelm Lehmbruck is amongst the most important sculptors of the 20th century. His forms with their stretched, elongated figures are unique. His sculpture was strongly influenced by the work of Rodin and Maillol, upon which he expanded to create his own very expressive sculptural style.

Following his studies at the Kunstakademie Düsseldorf, Lehmbruck moved to Paris in 1910. He frequented the Café du Dôme, where he met sculptors such as Brancusi, Archipenko and Modigliani. There, he also encountered the technique of cast stone, or "cast cement" as it was also called at the time, and which was already being used by Brancusi. In the Middle Ages, stone castings were used for large sculptures on churches, yet the process was employed mostly for architectural purposes until the beginning of the 20th century. New cement mixtures allowed for greater artistic possibilities which were met with Lehmbruck's joy for experimentation.

His sculptures are not always made of the material from which they appear to be. Lehmbruck tinted his stone casts with beige, ochre, blue, grey and reddish hues so that each casting always produced an original. By 1911 he had already expressed to Julius Meier-Graefe his preference for stone casting.

Lehmbruck's most important works were created in the decade between 1910 and the artist's untimely death in 1919. The bust offered here was cast during the artist's lifetime and is part of Lehmbruck's monumental sculpture "Der Emporsteigende Jüngling" (Rising Youth), which was produced in 1913-1914. Larger than life, and with attenuated, elongated and stretched limbs, a young man stands on a thin plinth with his body erect, the right leg supporting the weight of his body, while the left rests on a stone or lump of earth. Very characteristic of Lehmbruck's work is his design of effectually architectural figures which have often been compared to Gothic architecture, as can be seen in the buttress-like appearance of the man’s left leg. The figure evokes an ambiguous response, the viewer unsure whether the man is actually rising or waiting rather hesitantly. Of the two arms crossed in front of his chest, the left points upwards with his hand, yet his head is inclined downwards, paying more attention to the resting left foot. The "Rising Youth" appears pensive. Lehmbruck thus creates multiple layers of tension that can be directly experienced by the viewer. The historical situation just before World War I undoubtedly had some influence here.

While the "Emporsteigende Jüngling" recalls the artist’s "Große Kniende", its similarity to the "Großen Sinnenden", with which it could enter into dialogue, has often been emphasised even though the artist created both figures independently of one another. Although they face each other in the Leopold Museum, they are situated at slight angles in order to create a distance between the two despite the proximity. The Museum in Winterthur (Switzerland) also exhibits the two busts vis-à-vis, which creates a very nice effect.
The stone cast presented here is particularly beautiful in its details, as seen in the very pronounced strands of hair on the back of the head which have been lost in later castings. Today there are only three known casts of this quality from the lifetime of the artist: one in Winterthur, one in a private collection in Germany and the one offered here.