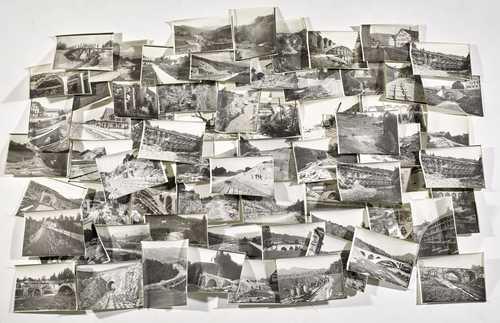 German Wolf (1830-1890) is considered one of the pioneers of photography in southern Germany and from 1870 onwards bore the title as a court photographer of the Grand Duke Friedrich I of Baden. After his death, his stepson, Eugen Wolf (1865-1939), together with his mother, pushed his biological son, Alfred Wolf, out of the business and continued to run it. In 1893 he was granted by the Grand Duke the privilege of continuing his father's title as court photographer. For this reason, there were posthumous prints with the imprinted signature of the father. More than 7,500 plate negatives of Wolf's studio are now in the Constance city archive. Eugen Wolf is especially known for his architectural photographs and his documentation of the Bodensee-Toggenburg railway and the Chur-Arosa railway. The present photographs show tracks and bridges, structures, railway platforms, tunnels, railroad crossings, etc.

Sold for CHF 375 (including buyer’s premium)
All information is subject to change.