About us - Koller Auctions

Our auction house celebrated its 60th anniversary in 2018. Founded in 1958 by Pierre Koller, Koller Auctions is now the largest Swiss auction house and one of the leading auction houses in Europe.

We employ 70 people at our headquarters in Zurich and in our branches and representative offices in Geneva, Munich, Düsseldorf, Genoa and Beijing. The artworks entrusted to us are appraised by our experts on the basis of thorough research and years of experience, and their age, authorship and provenance are determined in collaboration with leading experts worldwide. We guarantee the accuracy of this information in our auction catalogues, to both consignors and purchasers.

Our buyers are international and come from more than 50 countries in Europe, America and Asia.

We offer our consignors an all-inclusive service, from appraisal, shipping and customs formalities, to the successful sale of their works and punctual payment. As a family business, now run by the second generation and in which the third generation is already active, our philosophy is customer-oriented and our outlook is long-term.

We look forward to doing business with you. 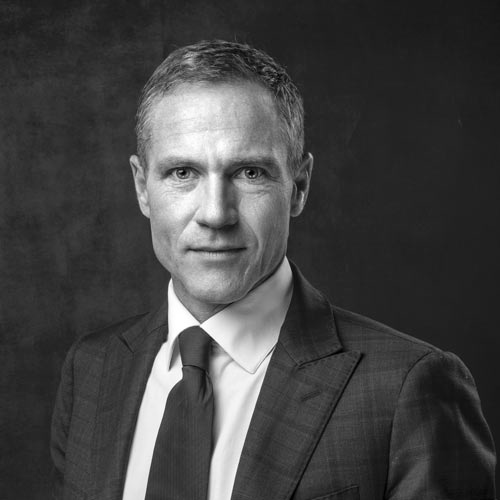 Koller Auctions has been an integral part of the Swiss art market for over 60 years. A book about the company's history by respected art market journalist Christian von Faber-Castell was published in 2008 on the occasion of Koller's 50th anniversary. Zürcher Werd Verlag. 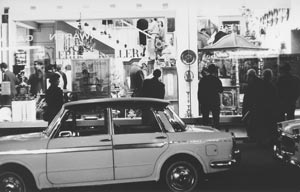 A tempting display window at Koller's headquarters
in the Rämistrasse in Zurich. 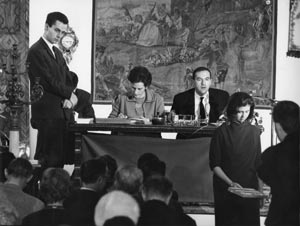 Pierre Koller as auctioneer during
the early years. 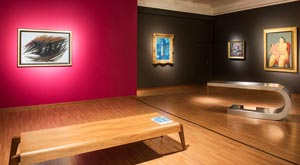 An auction preview at Koller Zurich. 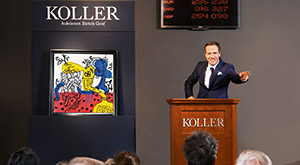 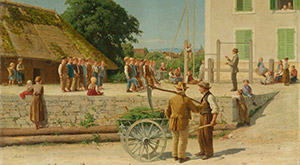 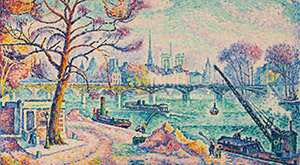 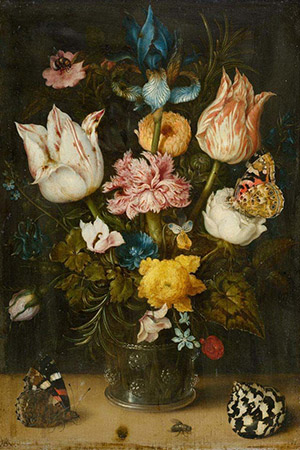 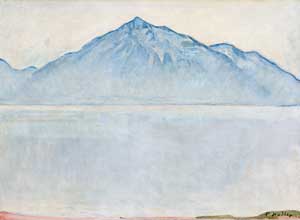 A brief history of Koller Auctions

1958 – Pierre Koller, having spent his youth between the French and German parts of Switzerland (Lausanne and Zurich), decides to make a career out of his hobby. At age 34, he opens a gallery of equestrian engravings and antique furniture on Zurich's Dufourstrasse. The timing was right, and Pierre Koller took advantage of his excellent contacts to establish himself on the Zurich market.

1959 – Pierre's sister Antoinette joins the business, contributing her specialized knowledge of Asian art and porcelain. At this time, a German clock collector offers to sell his entire collection to Koller, but the asking price of 100 000 Swiss francs is over the young entrepreneur's budget. Not wanting to miss the opportunity, however, Pierre Koller convinces the collector to consign his clocks for auction.

1960 – The first auction is held in the Zurich Kongresshaus. Approximately 1000 lots are catalogued and sold, successfully. One year later, another auction is held with furniture, porcelain and modern art, including Swiss and international artists such as Ferdinand Hodler and Eugène Boudin.

1961 – The Galerie Koller moves to prestigious premises at Rämistrasse 8, in Zurich's cultural centre, close to museums, the municipal theatre and the opera. Auctions gain in importance over antique dealing, and the firm soon holds two auctions annually.

1977 – 'Koller Tiefenbrunnen', a branch for arcade auctions, is opened. Koller's second-tier auctions provide a separation between sales of top-quality and mid-range works of art, and allow the company to handle entire estates and large collections.

1980 – The Koller Geneva branch office is opened and becomes the second location for auctions after Zurich. With twice annual auctions at the Hôtel Metropole, the Geneva office quickly develops its own profile. From the late 1990s until the late 2000s, auctions are held in the Palais de l'Athénée in November and May, dedicated to Art Nouveau, Art Deco, Design and Modern Art as well as Wine and Modern Illustrated Books. Today, the team at Koller Geneva continues to serve consignors and collectors in Western Switzerland and neighbouring France.

1990 – The Zurich headquarters moves to a new, larger and more practical space on Hardturmstrasse 102 in west Zurich. The rationalization of office, exhibition and warehouse space is greatly appreciated by the clientele as well as the employees of Koller, as is its proximity to the main train station as well as to the Zurich airport. At this time, Cyril Koller, the eldest son of Pierre and Ursula Koller, begins working at the company at the age of 23.

1995 – An exquisite collection of Napoleonica is offered for auction in a single-owner catalogue of important furniture, sculpture, clocks and bronzes, all closely associated with the emperor and his circle. The catalogue became a reference work in the field and cemented Koller's reputation as one of the world's leading auction houses for Empire period furniture & decorative arts.

1998 – Cyril Koller takes over the management of the company. Under his direction, the auction house evolves into a modern enterprise with various teams of specialists under one roof. The passing of Antoinette Koller, who brought the Asian art department of Koller to an international standing, occurs during Koller's 40th anniversary year.

2006 – Koller holds its first auction entirely dedicated to Swiss Art. Over the following decades, this department will become one of the pillars of Koller's business. Koller Shanghai opens: Koller is one of the first European auction houses to organize auctions devoted to Chinese contemporary art.

2007 – The Metropolitan Museum of Art purchases a sanguine drawing attributed to Andrea del Sarto for its permanent collection.
In September, two marine paintings by Ivan Konstantinovich Aivasovsky sell for CHF 2 million and CHF 1.2 million and two others realise six-figure prices, the beginning of a long period of excellent prices for the Russian artist in Koller's 19th-century paintings auctions.

2008 – Koller celebrates its 50th anniversary. Its name is officially changed from 'Galerie Koller' to 'Koller Auctions'. In September, a still life on copper by the Netherlandish artist Ambrosius Bosschaert, discovered by Koller's specialists in a private collection, sells for the world record price of CHF 5.7 million. Its jubilee anniversary also witnesses Koller's first auction dedicated entirely to contemporary art.
Koller opens a representative office in Düsseldorf.

2012 – The market for Asian Art reaches new summits. The Asian Art department at Koller auctions a Tibetan bronze of the goddess Panca Raksha for the record price of CHF 3.24 million. In the same year the Nessi Collection comes to auction, with over 500 rare antique tools and instruments.

2013 – In June, Koller auctions several paintings from the prestigious Corboud Collection – including a landscape by Vincent van Gogh from 1887 for CHF 6.6 million. The record price realized for a work by Albert Anker also creates a sensation, when the 'Gym Lesson' sells for CHF 7.5 million. During this record-breaking year, numerous Old Masters and works of Modern Art sell for beyond the million mark, including paintings by Renoir, Monet, Signac, Pissarro, Caillebotte, Dou, Reni and many more.
Koller opens a representative office in Italy.

2014  – An extremely rare bureau plat by the important French ébéniste André-Charles Boulle attains CHF 3 million. This desk, which was conserved in the family of the French Finance Minister Charles-Henri Malon de Bercy (1678–1742), is among Boulle's most significant works and is considered to be a reference in the field of French cabinetmaking of the early 18th century.

2015 – One of the most important paintings by Albert Anker, 'The Wine Festival', is sold for CHF 4.2 million. It was originally in the collection of a winegrower who needed to raise money to repair the roof of his home, and was acquired in 1977 by the consignor for the modest sum of the repair.
Koller opens a representative office in Hamburg.
Koller holds its first stand-alone auction of watches. Two years later, prices are regularly realised for watches on an international level, and the percentage sold averages nearly 100%

2016  – Koller sets a new world auction record for a work by Swiss artist Giovanni Giacometti. The 'Panorama of Flims' – for many years forgotten in the basement of a luxury hotel before being rediscovered in the 1980s – is acquired by a private collector for CHF 4.05 million. The total realised by the auction of Swiss Art in June (CHF 9.2 million) affirms Koller's ranking among the world's leading auction houses in this field.

2017  – A private German collection with highly important Imperial Chinese works is offered at auction by Koller. Thanks to an intensive marketing campaign in China, the works are hotly disputed by Asian collectors, realising prices in the six and seven figures.

2018  – Koller, still in the hands of the same family, celebrates its 60th anniversary.
In addition to its traditional high-end saleroom auctions Koller establishes a platform for timed auctions under the brand 'Koller ibid online only'.

2020  – Koller has a very successful year despite restrictions and rescheduling due to the worldwide coronavirus pandemic, with enthusiastic telephone and online bidding in each of the auction series and across all collecting categories. Several private collections record excellent results, such as the Müller-Frei and Ducret collections of porcelain, and the 'From Corot to Purrmann' private collection of 19th and 20th century paintings. In December, a sublime landscape by Ferdinand Hodler, 'Lake Thun with the Niesen', sells for CHF 4.05 million.