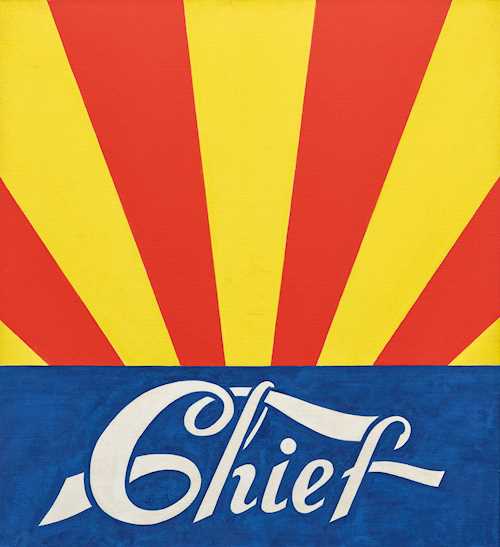 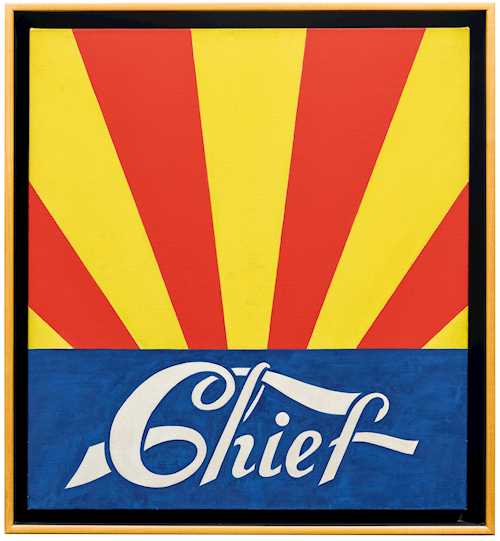 Unlike Andy Warhol and Roy Lichtenstein, Robert Indiana’s focus is America’s cultural identity, so that what interests him above all is the relationship between individual and national identity and the socio-political changes of the 1960s.

In 1947 the young Robert Indiana undertook a trip through the South West of the United States, using presumably the now famous Super Chief train. This train runs the stretch between Chicago and Los Angeles and with its red and yellow paintwork with the head of a Native American chief as emblem, it cannot be missed. Presumably also on this journey, Indiana began to be interested in the history of the Native Americans and their social status in the United States. While the films and media of the time did not spare the negative stereotypes of Native Americans, the artist’s experiences were probably distinct from that.

Robert Indiana is known for his use of symbolic lettering – there is hardly anyone who does not know his “LOVE” sculptures. The word “Chief” appears for the first time in 1962 on a wooden sculpture. The work presented here from 1969 is reminiscent of a simplified Coca-Cola lettering, behind which the sun appears to rise with bright red and yellow rays. Robert Indiana plays with our associations to great effect, and with a word and two colours takes us to the heart of American society. The lettering, inspired by Coca-Cola, directs us to American consumer society, the rising sun could symbolise the American Dream and the English word “Chief” is inextricably linked to the idea of Native Americans.