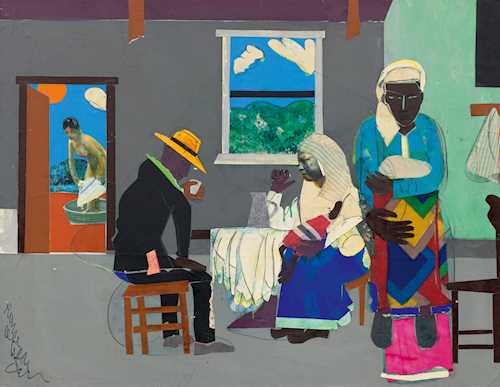 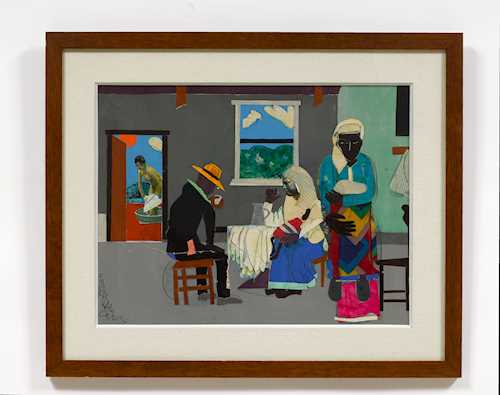 
“A painting isn’t finished; sometimes you get the surface.” Edouard Manet

The Black American artist Fred Romare Harry Bearden was born in Charlotte, North Carolina, in 1911. After a racially motivated attack on his family, they moved to Harlem, New York in 1915. From 1927 to 1929 Bearden lived with his maternal grandmother in Pittsburgh, where he completed his school education. In 1930 he began his studies at Boston University and took numerous art courses. Bearden moved back to New York, where he continued his studies and worked as a cartoonist for various magazines. In 1935 he graduated from New York University. His teacher, the German artist George Grosz, had immigrated to the United States in the 1930s, and had a great influence on the young student. He introduced him to European modernism and through him Bearden became acquainted with the collages of Hannah Höch and John Heartfield. While studying, he also spent time as a social worker in Harlem, where, in addition to the artistic skills he learned from Grosz, he also became more familiar with the lives of marginalised groups and minorities. The social problems triggered by the Great Depression, the impending World War and everyday racism had a great influence on his art.

Bearden's first solo exhibition of paintings, gouaches and watercolours took place in New York in 1940. In 1942 he joined the US Army and was posted to Europe. After the War, he moved to Paris to study philosophy at the Sorbonne and returned to New York in 1952 again engaging himself as a social worker. His time in Paris strengthened and cemented his love of European modernism. 1959, gallery owners Arne Ekstrom and Michel Warren visited him in his studio and went on to represent him until his death. From the 1950s on, he was increasingly interested in collage, which became the dominant medium in his oeuvre. He mainly used photographs and found images from newspapers and magazines, which he assembled in complex, spatially dynamic compositions.

Bearden and his wife became active in the Civil Rights Movement, since they had experienced racism and social and political inequality directly. Until 1969 he continued to work full-time for the Department of Social Services but left this job to focus exclusively on his art. In 1971, the Museum of Modern Art honoured Romare Bearden with a retrospective. In 1976, he was awarded the Gold Medal for Achievements in the Arts by the Governor of North Carolina. In March 1988, Romare Bearden died in New York at the age of 77.

The present work "Mecklenberg, evening" from 1980 is part of a series of collages that Bearden created, inspired by his home in North Carolina. After Bearden’s parents moved to New York in 1915, spent his summers for the next five years with his grandparents and did not visit his old home again until 1940. That visit triggered a fascination with the "African American way of life" (Hanzal, Carla M. et al: Romare Bearden. Southern Recollections, London 2012, p. 42) which would occupy him for most of his life; the last collage from this series was created in 1986. Thematically, Bearden dealt with the lives of the workers, but also family life. With his collages, he revived old memories of that time: "Time is a pattern ... You can come back to where you started from with added experience and you hope for more understanding", said Romare Bearden, only to realise without any illusions that with each return, reality disappears more and more and is replaced by myths (ibid., p. 39).

In our collage, Bearden enters the home of a Black American family. The door and window are open, so that the viewer's gaze wanders into a green landscape with a bright blue sky and white clouds. A couple is seated at the table; another woman stands facing the viewer. This work strikingly illustrates the artist's different influences. The view outside the home is reminiscent of Picasso's linocut "Bacchanal à l'acrobate" from 1959, in which a blue sky with white clouds also rises above a lush, green landscape. The woman bathing in front of the open door evokes associations with Degas' "Le Tub" of 1886. The face of the woman sitting at the table is collaged with a newspaper clipping, the face of the figure standing at the front to the edge of the picture has been replaced by a mask, also seen in collages by Hannah Höch. In addition to the influence of European modernism, there are allusions to "non-Western" art, particularly in the fabrics used in the collage.. The collaged elements of this work, which might not seem to fit together at all, are combined by Bearden with such aplomb that a compositionally coherent work emerges. The work demands engagement with what is depicted, and the themes that are brought into play. The relationship of the people depicted and the significance of the bathers, who bear no relation to the scene in the house become objects of attention.Glenda Elizabeth Gilmore points to a personal aspect in all his Mecklenberg collages: "It was the leaving that made Romare Bearden an artist. Snatched out of the nest of a large family with comfortable surroundings, banished from blue Carolina skies, the warm air coming in through the windows and doors, and the bright colours of urban garden, Bearden found himself set down in Harlem." (Ibid, p. 47).

The great fascination of Romare Bearden's work is the state of tension within which he inevitably created in his art: European modernism from the perspective of the American, the relationship of the Black American to the American artist and, last but not least, the fascination with "non-western" art. Unlike almost any other artist, he moved simultaneously within and outside the canons of Western art.

The importance of Romare Bearden’s art is currently being recognised in the project of the Wildenstein/Plattner Institute in New York to compile a comprehensive catalogue raisonné of his works, which we naturally support by presenting the work on offer.