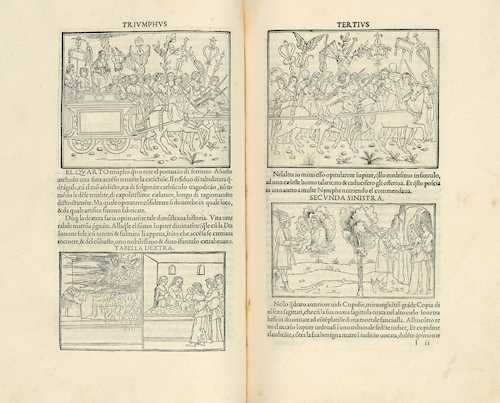 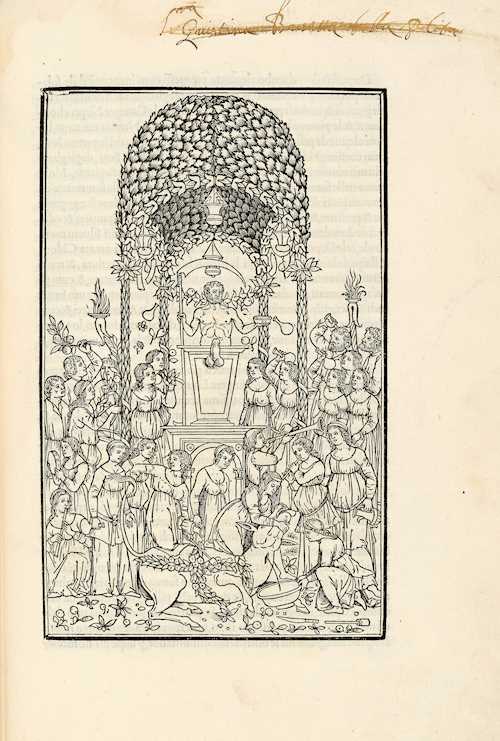 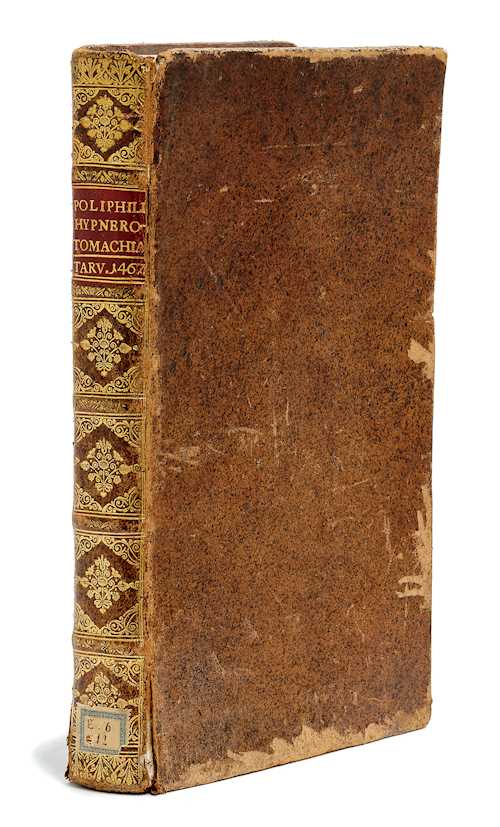 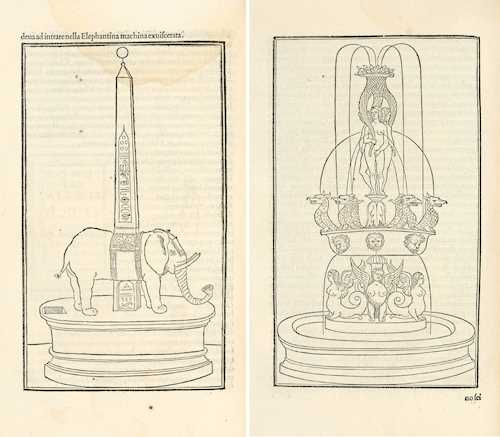 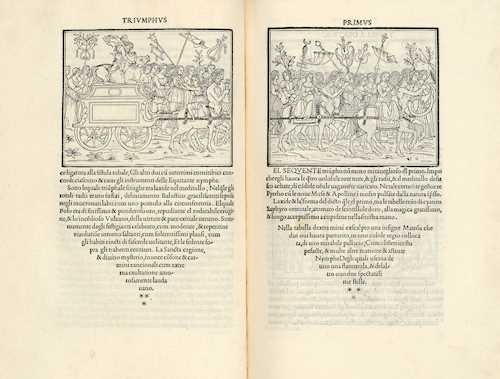 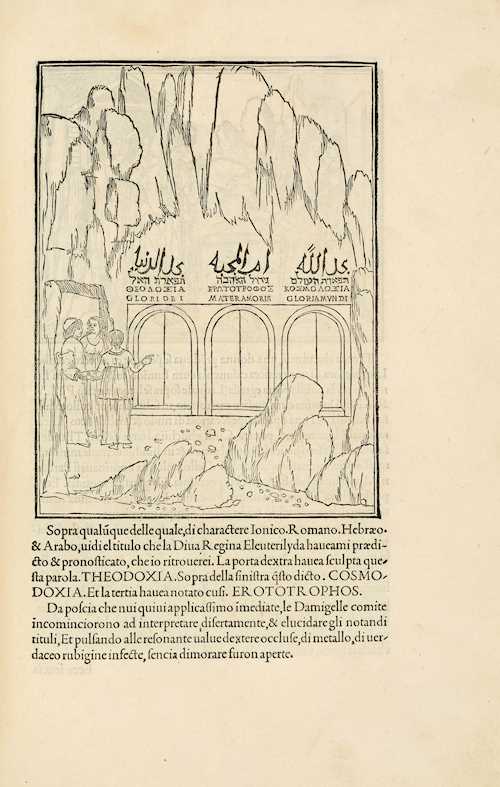 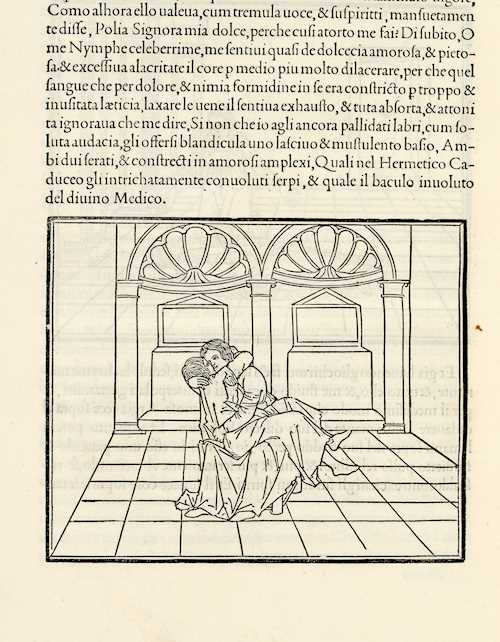 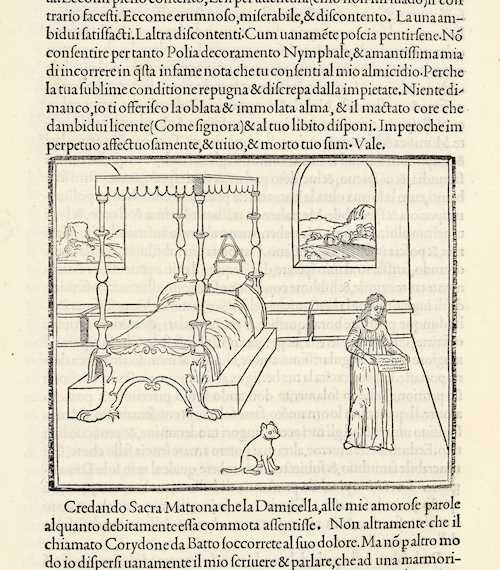 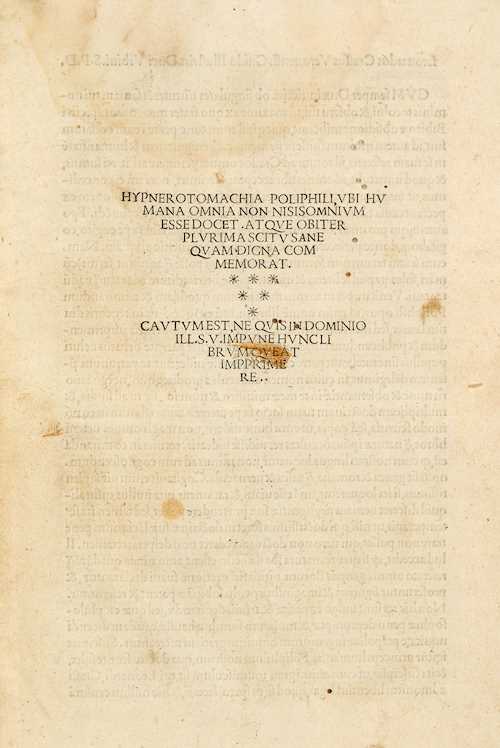 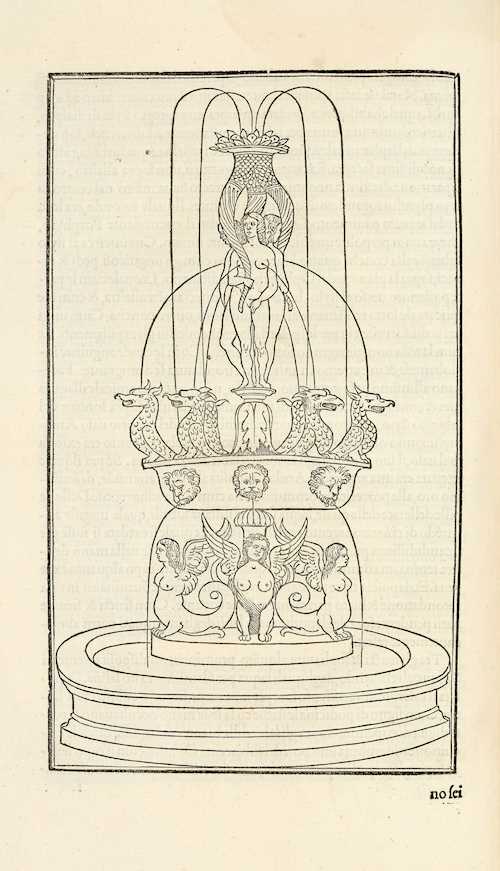 Colonna, Francesco.
Hypnerotomachia Poliphili. With 172 (11 full-page) woodcuts (attributed to Benedetto Bordon) and 39 woodcut initials.
Venice, Aldus Manutius [for Leonardus Crassus], 1499. Folio. (31.7 × 22.2 cm). [234] pp. 18th century leather binding with gilt spine label and rich spine gilt (joints chipped, edges scuffed, sign. mark on spine). Bound in green morocco c. 1900 with gilt spine title and corner fleurons (spine lightened).
GW 7223 - Hain/C. 5501 - Goff C 767 - Sander 2056 - Essling 1198 - Renouard 21.5 - ISTC ic00767000 - Aldinen-Slg. Berlin 49 and 50 - N. Harris, Nine reset sheets in the Aldine Hypnerotomachia Poliphili, in: Gutenberg-Jahrbuch 2006, pp. 245-275. - First edition in the first printing state, with the features described in Harris of the nine leaves in question in the original set. The Priapus woodcut retouched in the vast majority of copies is uncensored. - This work, as famous as it is enigmatic, is still considered the most beautiful illustrated book of the Renaissance and an ideal solution for the harmonious combination of text and image. Its not exactly catchy title, which means something like "Dream Love Controversy of Poliphilos", already refers to a highly artificial event, removed from reality. In fact, it describes the dream of Poliphilo, who is searching for his beloved, as an Arcadian wandering on which the hero arrives at enchanted forests, grottos, ruins, a pyramid and an amphitheater, among other places. He encounters various mythical creatures, allegories, and gods along the way, giving his author the opportunity to expound detailed architectural descriptions, metaphors, and philosophical riddles. This author remained unknown for a long time, only in the 18th century it was noticed that the 38 initial initials of the individual sections form an acrostic: "Poliam Frater Franciscus Columna Peramavit" - Brother Franciscus Columna loved Polia very much. - However, the identification of Columna as the author brought up a new problem: two authors of this name come into question. One is a Dominican friar from Venice, the other a nobleman from Palestrina near Rome. To this day, the authorship of the work has not been clarified beyond doubt. The woodcuts of the work, which appear immensely modern in their strictly linear design, are attributed to Benedetto Bordon. - The book is significant in terms of language and printing history because it is written in an unusual mixture of Latin, Latinized Italian, newly invented Latinisms, and 15th century Roman Italian. In addition, there are passages in Hebrew, Arabic, Greek, Egyptian hieroglyphics as well as mathematical notes, geometric and architectural construction plans, and more. - Initially slightly fingerstained, the first ca. 50 leaves with small, mostly barely noticeable worm marks and minimal loss of letters. Continuous dampstain in upper margin, initially stronger and extending into the type area, then narrowing and running into the white upper margin. Two pages with old ink stains, one full-page woodcut with crossed-out marginalia by old hand in upper margin. Two more woodcuts added by old hand in brown ink. - Provenance: bookplate of the Swiss bibliophile Paul Schlesinger (1897-1977) by J. F. Junod on endpaper. - Since then Swiss family property.