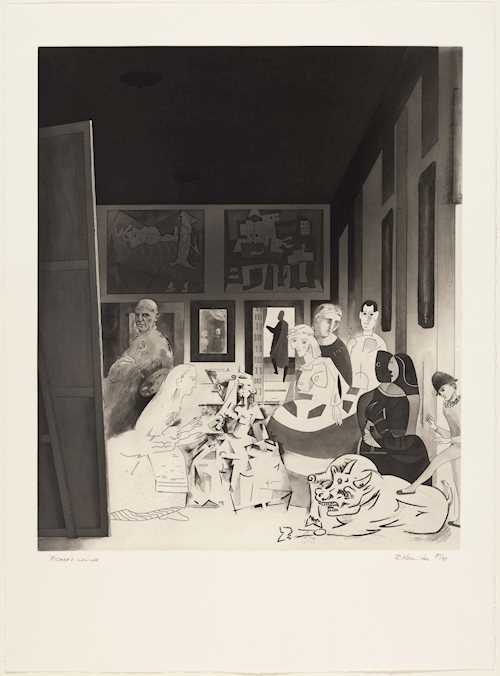 Sold for CHF 25 920 (including buyer’s premium)
All information is subject to change.

“Las Meninas” by Diego Velázquez from 1656 is without doubt one of the most important paintings in the history of art. Between August and November 1957 Pablo Picasso (1881 – 1973) examined the work intensively and Richard Hamilton (1922 – 2011) after his first visit to the Prado in 1972 was so powerfully affected by the painting, that he used it as the framework for his print in honour of Picasso.

He copied the spatial arrangement and position of the staffage exactly but replaced the royal family with figures from all the periods of Picasso’s oeuvre. He presented Picasso’s artistic mastery as on a stage:

On the right edge of the picture we find a harlequin from the pink period, who appears to be treading on a bull from Picasso’s masterpiece “Guernica”. Behind the bull to the right we have a seated woman, modelled after “Femmes assises” of 1927 (Zervos, vol. 7, Nr. 7); to her right is a figure typical of the late 1930s. In the next row there is a woman, who is reminiscent of Picasso’s Neo-Classical style of the early 1920s and next to her a figure of an archaic style, which we know from “Les demoiselles d’Avignon” (Zervos, vol. 2, Nr. 18). In the centre of the picture is an Analytic-Cubist figure, who again turns to a woman from the Neo-Classical period. Pablo Picasso himself takes up the central position of Velázquez before the easel. In the mirror on the back wall, where in the original painting the royal couple can be seen, we see reflected Richard Hamilton and his partner. Even the painting on the back wall has been replaced by Picasso’s paintings: “Nu couché et femme assise” from 1942 (Zervos, vol. 12, Nr. 69) and “Three Musicians” from 1921 (Zervos, vol. 4, Nr. 331).

There is probably no other work in art history which brings together the achievement and uniqueness of an artist so impressively, and without any doubt expresses the admiration and recognition of his unique body of work. That Pablo Picasso was the most important and most influential artist of the 20th century, is, according to this impressive homage, beyond all question.

Sold for CHF 25 920 (including buyer’s premium)
All information is subject to change.