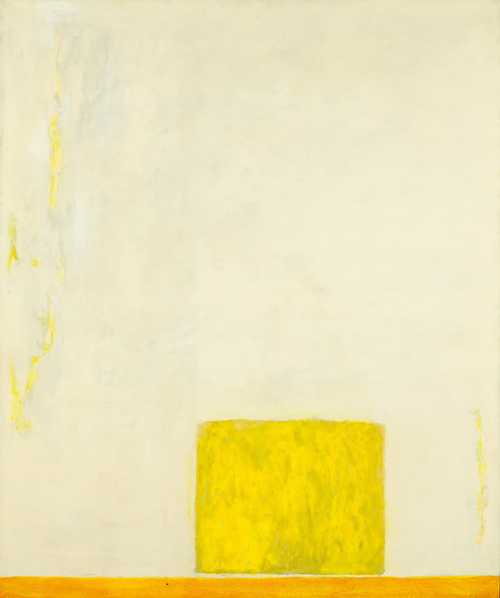 Theodoros Stamos was born in New York in 1922, the son of a Greek immigrant. A bursary enabled him to attend the American Artist School, where he studied sculpture until 1939. Through his acquaintance with the artist group “The Ten” and having studied the works of Milton Avery and Marsden Hartley, shortly before his graduation he turned to painting and abandoned his studies. He found refuge in various studios and quickly made the acquaintance of artists such as Arshile Gorky, Adolph Gottlieb and Barnett Newman. His initial figurative works show the influence of Surrealism, his fascination with amorphous figures and his interest in the primeval and mythology. In 1943 he had his first exhibition at the Wakefield Gallery, so that his works became known to a broad range of collectors and he came into contact with Abstract Expressionism which was then slowly developing. From the mid-1940s he increasingly took on teaching assignments, for example at the progressive Black Mountain College. Around 1954 Stamos began to work predominantly in series, which were increasingly dominated by colour surfaces. Numerous journeys through the US and Europe expanded his horizons and brought new facets to his work. Often his oeuvre is compared to that of Mark Rothko, in that Stamos has an articulated painting style, with its origins in nature and not in metaphysics. He and Mark Rothko enjoyed a close friendship, which meant that after Rothko’s suicide, he was named as executor of his will and became entangled in the untold machinations of the estate administrator. In the subsequent court case brought by the Rothko children in 1971, Stamos lost a large part of his wealth and his reputation. He returned to Greece and died there in 1997 of chronic lung disease.

The present work, “Very Low Sun-Box” is the first of the so-called Sun-Box series, to which Theodoros Stamos devoted himself in the years 1962 – 1974. Stamos’s oeuvre is underpinned by a stringent development of the figurative from the beginning of his activity as a painter until the abstract expressive works. There is no sudden change or alteration: instead it is based on his previous artistic development. It is therefore not surprising that even in this first work of the new series, all the features have been carried over from before. The meteoric circles favoured until the beginning of the 60s (Lot 3418), become squares, which dominate the Sun-Boxes and serve as symbols of the trapped solar energy. The opposite pole to the boxes is represented by the beams, which are always in the vicinity. While these two main elements of the composition at first sight appear quite banal, the artist succeeds in creating works of the greatest and at the same time most diverse and singular effect by means of different compositions combined with a skilful application of colour.

In this Stamos has committed himself fully and entirely to colour. Through the use of colour, he has produced every possible variation of light effect, with its corresponding atmosphere. At first sight the works of the Sun-Box series with their fine, harmonious application of colour and the severity of the composition, give out an endless sense of calm. Small deviations in the geometry and the shimmer of different layers of colour, however, disturb this calm and lend the work energy and depth.

Theodoros Stamos is one of the most important exponents of the first generation of Abstract Expressionism and is regarded as a precursor of Colour Field Painting.