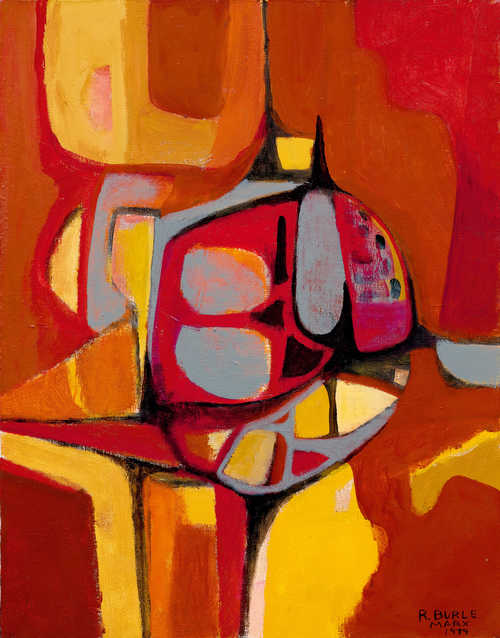 Sold for CHF 17 300 (including buyer’s premium)
All information is subject to change.

“A good landscape architect has to know not just about plants. He must also know about Piero della Francesca, and understand what makes a Miró, a Michelangelo, a Picasso, a Braque, a Léger.” (Roberto Burle Marx)

The universal artist Roberto Burle Marx was a painter, sculptor, landscape architect, stage designer, designer and environmental activist. A Renaissance personality in the 20th century. During his 60-year career he developed over 2000 gardens around the world and discovered around 50 new types of plant.

Born in Sao Paulo in 1909, he grew up with his German-Jewish-Brazilian parents who were art enthusiasts and progressives. His mother was a pianist and singer. From early on his artistic and musical talents were fostered. As a young student of painting he went with his parents on a cultural trip to Berlin in 1928. Visits to the German Opera, the countless Berlin museums and the Botanic Gardens in Berlin-Dahlem made an impression on his stay. Ironically it was there that he came into contact with tropical plants for the first time. After his return from Berlin, Burle Marx turned to the architects Lúcio Costa, Le Corbusier and Oscar Niemayer and began to work for them on their projects as a landscape architect, although he continued to be enrolled as a student of painting at the Escola de Belas Artes in Rio de Janeiro.

The early plant studies and drawings, paintings and garden designs led him both in the fine arts as well as in landscape architecture towards abstraction. He developed a succinct style, which disrupted the strong symmetry which had hitherto held sway in South American landscape architecture and which was modelled on the European garden designs of the Belle Époque period. In his garden design he translated the flatness of a picture into three-dimensionality, so that his gardens were often reminiscent of an abstract painting. The work offered at auction here comes from 1974. We can imagine how he was inspired by the local floral, from the shapes and colours of the leaves, which were often his models. Burle Marx’s style is characterised by clearly defined colours, scale, surfaces, strong contrasts, and organic and serpentine-like forms, as well as geometric, chess-board-like panels.

Roberto Burle Marx’s interests extended way beyond his artistic activities, and he also enjoyed great recognition for his numerous achievements in botany and as an environmentalist. In Sítio Santo Antônio da Bica, an estate near Rio de Janeiro, which Burle Marx bought in 1949, he built a sprawling landscape of exotic plants, which he bequeathed to the Brazilian state in 1984. His most famous commissions worldwide include the wave structure of Copacabana beach promenade (1970), the Biscayne Boulevard in Miami (1988–2004) as well as numerous roof gardens, including that of the house of Alfredo Schwartz in Rio de Janeiro (1932).

Sold for CHF 17 300 (including buyer’s premium)
All information is subject to change.