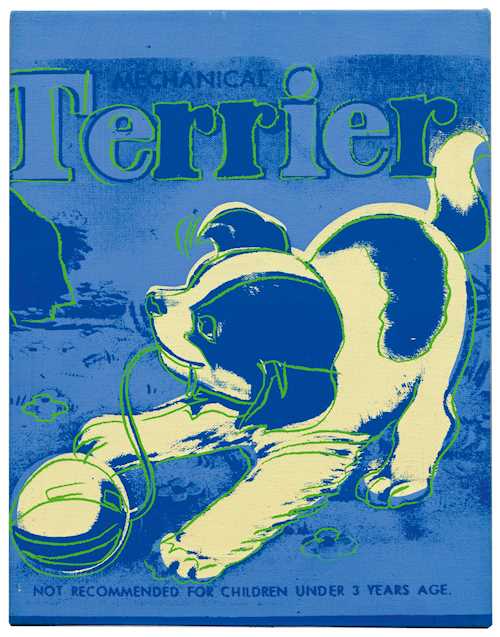 (Pittsburgh 1928–1987 New York)
Terrier (from: Toys series). 1983.
Synthetic polymer and screenprint on canvas.
Signed and dated on the overlap: Andy Warhol 83. Also numbered on the stretcher: 5.
35.5 × 28 cm.
Andy Warhol revolutionised art with his Pop Art and is undoubtedly one of the most influential artists of the 20th century. After a nervous breakdown at the age of eight, Warhol remained bedridden for several weeks and discovered a passion for comics, films, drawing and handicrafts.

After studying pictorial design and graduating with a degree in painting and design, in 1950 he moved to New York, where he discovered modern consumer society with its many temptations, dark sides, celebrities, headlines and tragedies. Fascinated by this world, Warhol soon rose to become the city's most successful commercial artist. Yet he wanted more. He wanted to become an artist and quickly transformed the most banal everyday objects into sought-after artworks. At the beginning of the 1960s, this virtuoso artistic genius discovered silkscreen printing, a technique that enabled him to create series of works and to work at a furious pace. With his Factory, founded in 1962, which became the epitome of the world of art, music and glamour, the annual production of his paintings increased in leaps and bounds.

"It must have been Walt Disney. I cut out Walt Disney Dolls. It was actually Snow White that influenced me", Warhol said in answer to the question of which artist influenced him first. Since his artistic work had always been guided by the ethos of play, it is hardly surprising that he immediately took to the idea suggested by his gallerist Bruno Bischofberger of creating an exhibition especially for children.

The "Terrier" at play in the offered painting is part of the "Toys Series" of 128 works with monkeys, parrots, clowns and robots. Warhol found inspiration for the small-format works in his private collection of wind-up tin toys. The cute terrier captivates with its eager playfulness and takes the viewer on a journey into the realm of children’s play.

Sold for CHF 201 600 (including buyer’s premium)
All information is subject to change.