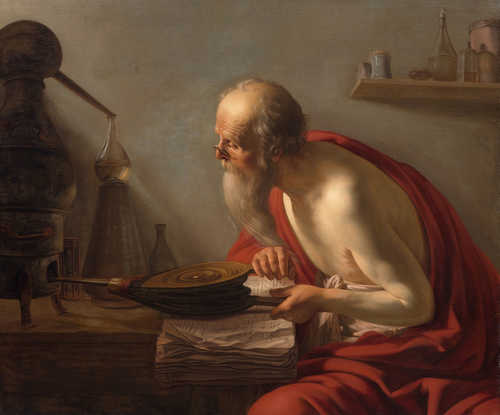 Rendered with supreme artistic skill, an alchemist is presented in his study chamber with a book in Hebrew script open before him on the table. Holding a bellows, he is about to stoke the fire in a small oven, upon which a downwardly directed glass flask transfers a transparent liquid into a second standing flask. On the otherwise barren back wall is a wooden shelf with vessels. Cascading light from the top left accentuates the room, modelling the forehead and the bare shoulder of the scholar, wrapped in a reddish-brown cloak.

Albert Blankert notes the unmistakable influence of the Utrecht Caravaggist Abraham Bloemaert (1564-1651) in this painting. He particularly highlights Bloemaert's creative period of the 1620s, which was mainly influenced by the Caravaggesque chiaroscuro-inspired candlestick paintings of his former pupil Gerrit van Honthorst (1590-1656) (see Nicolson, Benedict: Caravaggism in Europe, 2nd edition by Luisa Vertova, Milan 1989, vol. 3, ill. 1097-1104 and Roethlisberger, Marcel: Abraham Bloemaert and his sons, Doornspijk 1993, vol. 2, ill. 417-419). It is clear to Blankert that only one of the most accomplished students could have painted this outstanding presentation and he names Johannes Moreelse as his favourite. For Wayne Franits there is also no doubt that this work is by Moreelse.

Unfortunately, little is known about the small oeuvre and artistic personality of Johannes Moreelse. The works that have been thus far assigned to him are distinguished by their outstanding quality and have been compiled by Benedict Nicolson (ibid, nos 1199-1206). Two fully-signed paintings depicting Democritus and Heraclitus have survived and can be found today in the Centraal Museum, Utrecht (inv. nos 13824 and 13825). The Democritus in particular shows a comparable placement of the protagonist in the room and a similar still-life arrangement on a shelf on the wall.

Johannes Moreelse’s date of birth is unknown. However, the wedding of his parents in June 1602 suggests that he probably saw the light of day in close proximity. His father was the respected portrait painter Paulus Moreelse (1571-1638), who is said to have been his first teacher.

After his apprenticeship, Moreelse travelled to Italy, where he signed a record in Rome on 27 February 1627 as a witness on behalf of the Utrecht nobleman Joannes Honorius van Axel de Seny. Additional witnesses were the two Utrecht painters, Hendrick Bloemaert (1601/02-1672) and Thomas Knijff, who were presumably his travelling companions. Moreelse also joined the papal knight Order of Saint Peter in Rome. Back in Utrecht, he is said to have continued working in his father's workshop before he died in December 1634 during a plague epidemic.