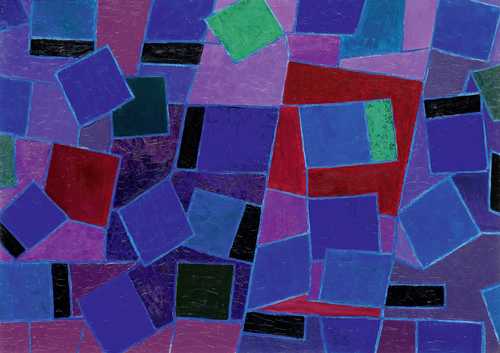 While Itten used painting during this period of teaching and lecturing as a way of testing his theories and he derived energy from this creative activity, in the last phase of his life, he dedicated himself again to his own art.
The present painting “Quadrate in Bewegung” (Squares in movement) from 1958 is an outstanding example of his late paintings. The composition stands out for its use of different rectangles and squares which are bound together by continuous contour lines. This way they seem to float, which endows the painting with great vitality. The confident use of colour supports the composition, so that the harmonious combination of various blue, red and violet tones in particular gives the work great radiance.