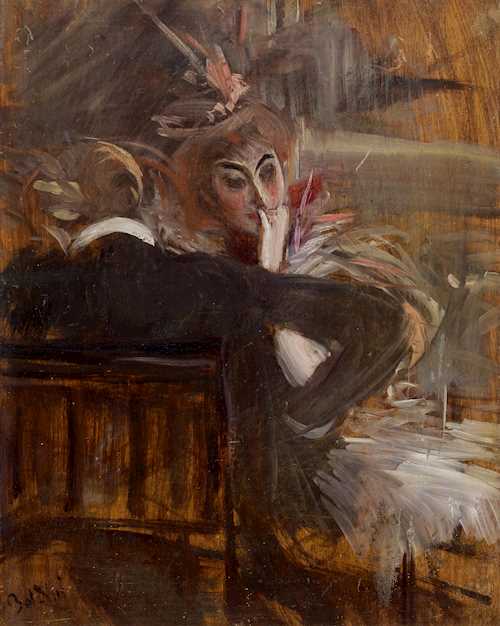 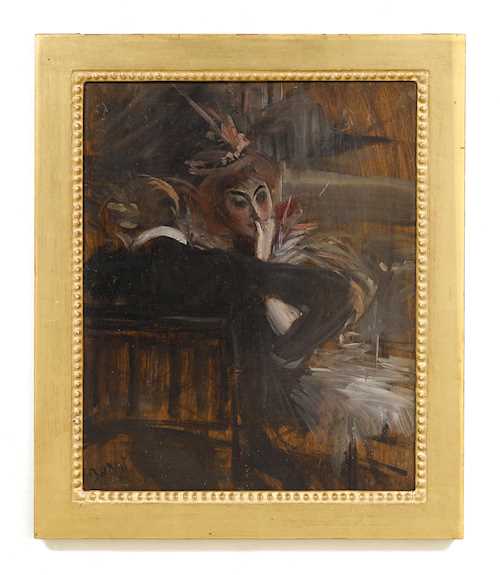 Giovanni Boldini lived on the pulse of the Parisian Belle Époche period. He drew inspiration for his work from the lively streets of the French capital — in bars, restaurants, theatres and cabarets. After spending time in Florence and London, Boldini, who hailed from Ferrara in Italy, went to Paris in 1873, where he quickly attracted attention. He portrayed the Parisian high society in elegant clothes, strolling in gardens or situated in decorative interiors. Boldini proved to be an active observer of modern Parisian life and his paintings quickly became very popular. Well-connected in the artistic milieu of the French capital, he maintained friendships with Edgar Degas, Édouard Manet, Ernest Meissonier and Berthe Morisot.

The present painting, "Al Ristorante”, is exemplary of Boldini's work both in terms of content and style. Restaurants and cafés as meeting places of modern Parisian life had interested the artist since the late 1870s. Two paintings, "The Red Café" from 1887 and "Couple in a Café" from the same year, show clear parallels to the work offered here from circa 1896. A darker colour palette, however, predominates in our work. The costume of the seated lady and her striking headdress are depicted in a hatched style. The details of the restaurant interior can only be surmised, as they are swallowed by a rough application of paint. This expressive character defines Boldini's late work and distinguishes his personal style, capturing the character of his figures and creating a special mood through a few sketchy brushstrokes.

Giovanni Boldini successfully established himself in flourishing Paris, the centre of the modern art market at the time, and developed into one of the most sought-after portraitists of his period. Alongside international private collections, his works can be found today in museums such as the Metropolitan Museum in New York and the Musée d’Orsay in Paris.