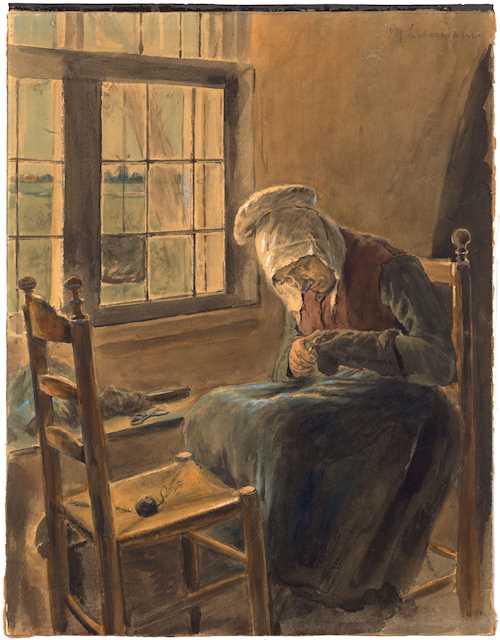 (1847 Berlin 1935)
Holländisches Interieur - Stopfende alte Frau am Fenster. Circa 1880–1900.
Watercolour and gouache on paper.
Signed upper right: M. Liebermann.
39.3 × 31 cm.
We would like to thank Margreet Nouwen for confirming the authenticity of the work, February 2020.

Produced in the summer of 1880 in the village of Dongen in Holland, an important painting of the significant motif of a mending woman is very often mentioned and reproduced in literature. It is one of the most famous works by Max Liebermann, and some sketches and preliminary studies have also been preserved. The very detailed work on paper offered here is a subsequent work that was probably created in the 1890s.

The light flooding from the window and the view of the vibrant green nature outside create an atmosphere that unifies humanity and nature. Everything is focused on the mending work, yet the painting stimulates the imagination of the viewer. The eye wanders through the room, across the sewing utensils lying on the windowsill and on the chair — the painting tells a story. Liebermann has masterly created a composition informed by models from the Dutch Golden Age, the handling of light probably based on works by Frans Hals, Peter de Hooch and Jan Vermeer, who influenced Liebermann very much at the time. However, it lacks the the symbolism and the refined bourgeois culture of the Dutch models. Lieberman has chosen not a bourgeois, but rather a simple rural motif.

As Hans Rosenhagen aptly described the picture: “One can see that she is a poor woman, but no one is led to believe she is particularly unfortunate. She is not viewed through the eyes of pity, nor with those of mockery. This is life, the most difficult and the most natural in its appearance. Rather than stimulate our sense of the needs of poverty, Liebermann lets her work and shows how even in the saddest cottage, nature unfolds a thousand beauties for those who can see” (translated from: Hans Rosenhagen, Liebermann, Leipzig 1900, p. 28).