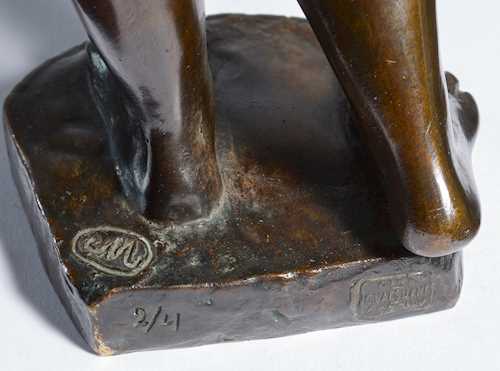 Created in 1919-1920, the bronze sculpture 'Femme à l’écharpe' is around five times smaller than its 'big sisters' in the Tuileries, but no less perfectly formed and sublime.She stands in a classically cool, yet graceful pose. Her gaze is not directed towards the viewer, but completely turned inwards. The elaborate hairstyle as well as her posture with raised arms recall the bronze 'Printemps' from 1911/1912, one of the four statues Maillol created as a large commissioned work for Ivan Morozov's music salon in Moscow. Instead of the flower necklace worn in the front as an attribute of spring, our young woman holds a scarf with finely worked folds stretching across her back.

The sculpture is not only extraordinary in itself, but also in its provenance: it comes directly from the Galerie Dina Vierny. Vierny was only fifteen years old when she met Aristide Maillol in 1934. She subsequently became his favourite model, his companion and good friend. The bond between Vierny and Maillol continues to this day. After Maillol's death in 1944, she was responsible for the preservation, dissemination, cataloguing and reappraisal of his work, during the first few years together with Maillol's son, Lucien. She later founded the 'Société des amis de Maillol', organised numerous exhibitions and in 1947 opened the gallery on Rue Jacob in Paris, which still exists and continues to be run in her name today.

This bronze example is from the first edition of 'Femme à l’écharpe', which Maillol produced during his lifetime in an edition of four. There is another series of six bronzes of this figure, but they were cast posthumously.