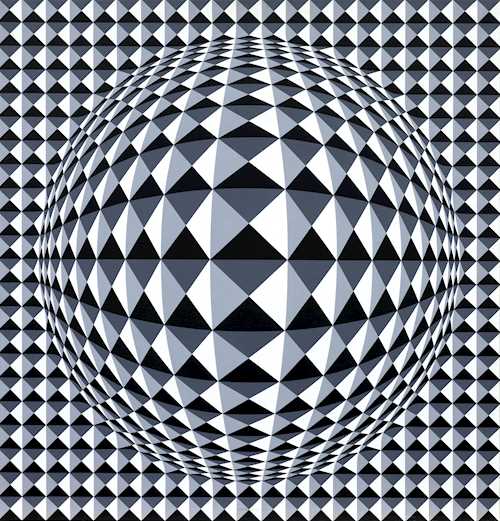 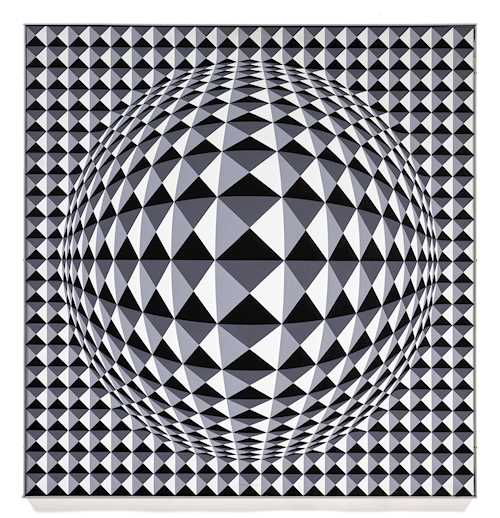 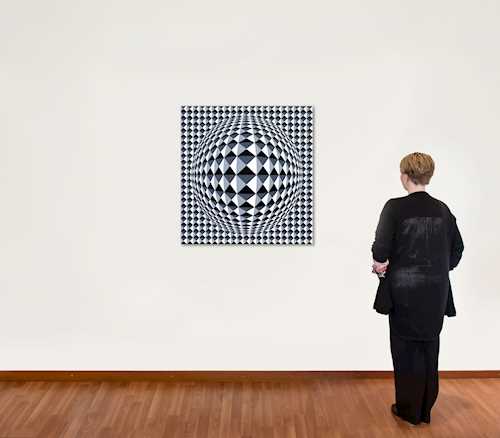 "In my kinetic depth images, the viewer in motion plays the most important role. When he looks at them from a fixed point of view, he sees only two forms that overlap because of the transparency of the surfaces. But as soon as he moves, as soon as he goes forward, steps back or wanders past the picture, it changes incessantly, the emotional shocks follow on from one another without respite, and the work begins to live, to diversify visually." Victor Vasarely

The French painter and graphic artist Victor Vasarely is considered the founding father of the luminescent and vibrant Op Art movement. With his geometric-abstract and often multicoloured compositions, which have been reproduced millions of times, mainly on posters, the brilliant artist of Hungarian descent had a decisive influence on the second half of the 20th century.

Alongside his studies at a private art academy in Budapest, which he began in 1927, Victor Vasarely earned his living by designing advertising posters. When he moved to Paris in 1930, his work bore the mark of his first tentative attempts at geometric abstraction. In his newly adopted country, he initially worked successfully as a commercial artist.

The artist soon took up the most important challenge and brought vibrations, rotations and oscillations to canvas with consummate skill. Victor Vasarely’s command of the game of optical illusions was second to none. His keen knowledge of symmetry and the theory of colour, as well as his ideas drawn from the theories of the Weimar Bauhaus, Suprematism and geometric abstraction, enabled him to produce polymorphous structures of visual illusion that seduce the eye into playful engagement.

In this two-dimensional composition, created in 1984, the artist uses only black, white and grey. With sharp contrasts of light and dark and painterly means, Victor Vasarely expertly conjures up the optical imagination and the almost unbearable vibration of complementary colours. He blurs the boundaries between two- and three-dimensional forms, between painting and sculpture, giving the static image offered here the appearance of dynamic movement. He allows the uniform squares of various sizes, which serve as a functional element in the play with perception, to swell up in the middle of the painting. This gives the viewer the impression of fluctuating movement in space and the central round shape seems to emerge from the canvas in relief.

Victor Vasarely's art can be traced back to theories of physics in relation to space, the body, time and movement. He made use of the perceptual-psychological effect of optical stimuli and always made the visual experience of the viewer the focus of his work. In his pictorial worlds, there is no one universal truth of perception.

Today, Victor Vasarely's work is represented in the world's most important collections and can be seen in public spaces. This is entirely in keeping with his motto: "Art for everyone".