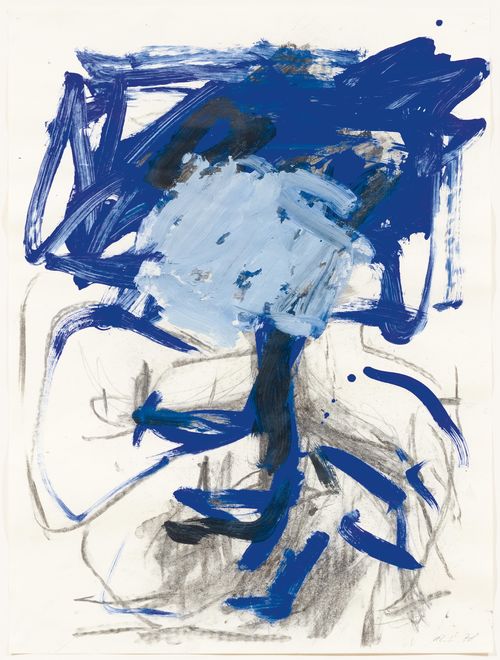 (Grossbaselitz 1938 - lives and works in München)
Untitled (tree). 1978.
Gouache and pencil on paper.
Monogrammed and dated lower right: GB (possibly not the artist's hand resp. later added) 18.II.78, also on the reverse with the archive number: GBZ 354.
60.7 x 43 cm.
We thank the Archive Prof. Georg Baselitz, Munich, for their scientific support. The work is registered there under the no.: GBZ 354.

Provenance:
- Probably in 1980 Galerie Neuendorf.
- Galerie Baronian, Brussels.
- Purchased from the above by the present owner in 1989, since then private collection Germany.

In 1969 Georg Baselitz embarked on a search for a new form of representation, in order to break away from the classical conventions of painting. While up to that date his oeuvre had been dominated by figure painting, and he had produced revolutionary series such as the so-called "Helden-Zyklus" (heroes cycle), he now questioned these motifs and structures. He wished to turn his attention away from the motif and towards the painting, and so, in the truest sense of the word, he turned his art on its head. "An object painted on its head is suitable for painting, because it is unsuitable as an object and free of value. Moreover, this method irritates and shocks; it shows an aggressive attitude, which, as a demonstration of the seriousness of my action, I find to be good." (cit. Georg Baselitz, in: Exh. Cat. Georg Baselitz. Gemälde und Arbeiten auf Papier von 1971-2004, Galerie Henze-Ketterer, Wittrach Bern, p. 8)

"Der Wald steht auf dem Kopf", today in Museum Ludwig, Cologne, is the first important painting using this new form of representation. By turning the motif 180°, on the one hand he removes from the motif its status as object, and on the other he challenges the viewer’s way of seeing and thinking. Although the technique and motif are deeply rooted in classical art history, through this inversion he achieves an opening up of the conventions of painting.

The present watercolour is also to be seen in this respect. At first sight, Baselitz denies the viewer access to this work - set upside down, the tree appears initially more like an abstract form. The colouring in blue and black also gives us no indication of what is depicted. It is only on longer contemplation that the bare, inverted tree reveals itself. He powerfully combines classical painting with a traditional subject which is deeply symbolic for Germany, with one of the most radical new approaches to form in the art of the 20th century.

Sold for CHF 50 900 (including buyer’s premium)
All information is subject to change.