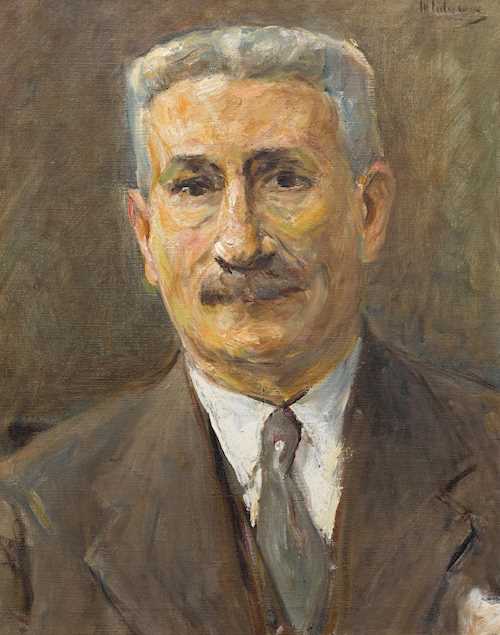 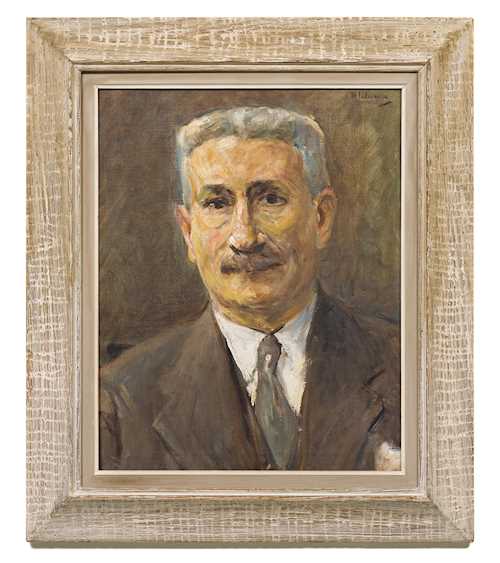 The collection of Robert Neumann

One collection, two paths, with the Atlantic in between: The fates of the two paintings by Max Liebermann that are offered here in the auction, the “Portrait of the businessman Robert Neumann” (lot 3202) and the “Study to Netzflickerinnen” (lot 3202), could not be more different. They both once belonged to the Jewish merchant Robert Neumann (1875–1937), who owned warehouses in Berlin and Königsberg in East Prussia under the name "Sommerfeld" and a considerable art collection with works by Monet, Degas, Gauguin, Sisley, Corinth, Leible, Cranach the Elder, among others.

Apparently, Robert Neumann was also a great admirer of the art of Max Liebermann for whom he sat as model in 1925 for the sensitive portrait offered here. That year Robert Neumann celebrated his fiftieth birthday - perhaps the reason for the successful entrepreneur to take stock and to be immortalized with a suit, waistcoat, white shirt, tie and pocket square, well-groomed and yet reserved.

Neumann owned other paintings by Max Liebermann, including a self-portrait by the artist "to the right with the cigarette in his left" (1902), as well as the "rose garden in Wannsee with the artist's daughter and granddaughter". Robert Neumann gave this enchanting, intimate garden view from 1920 to his son Max in 1926 on the occasion of Max’s wedding to Eva Ilse Goldstaub, the daughter of a prominent lawyer. The portrait of his father offered here was also finally received by Max Neumann, who ran his father's branch in Königsberg.

In March 1933, however, Max Neumann was the victim of a brutal attack by Nazi thugs; his widow fled with their daughter Toni, who was born in 1927, first to the Netherlands and later to the USA. She took the "rose garden" and the portrait of her father-in-law Robert Neumann with her to her new home, where she arrived in November 1938.

The "Netzflickerinnen", on the other hand, came from the collection of the Breslau collector Max Böhm, who was also portrayed by Max Liebermann. In January 1931, Böhm tried to sell his collection at the Lepke auction house in Berlin, but many works were not sold: in the midst of the global economic crisis, the time was not favorable for art sales. In any case, a letter dated February 18, 1931 has been preserved in the central archive of the Staatliche Museen Berlin in which Max Böhm offered the "Netzflickerinnen" along with other works to the director of the National Gallery at the time, Ludwig Justi. However, the museum declined with reference to the lack of a purchase budget. Apparently, the Jewish art dealer Dr. Fritz Nathan then bought the painting and passed it on to Robert Neumann.

In 1936 Robert Neumann emigrated to Merano, Italy, with his second wife Ilse Neumann, née Meinhart-Tucholski (1887–1940), a cousin of the writer Kurt Tucholsky (1890-1935). The art dealer Nathan, for his part, emigrated to Switzerland. In a clever move, Nathan managed to keep a total of 54 works, that were in the Neumann art collection, from being accessed by the National Socialists, including the "Netzflickerinnen": He declared them with the help of the then Mayor of St. Gallen, Konrad Nägeli, without further ado as a permanent loan to the local art museum, and had them deposited in the museum.

In June 1936 Robert Neumann gifted the works of art, which were stored in St. Gallen, to his second wife Ilse Neumann and passed away in Meran in 1937. His widow, whose identity papers had expired, was able to travel from Italy to Switzerland, again with the help of Nathan and Nägeli, and finally emigrated to the USA in July 1939. Prior to leaving Switzerland, she gave Nathan the job of selling her collection; the works were partly brokered to private collectors, partly taken over by museums and partly put up for auction at Galerie Fischer Lucerne in 1941, including the “Netzflickerinnen”.

Ilse Neumann died in 1940, just a few months after arriving in the USA. In a will, she bequeathed the art collection that remained in Switzerland (or rather the proceeds from the sale) to the daughter of her deceased husband, Irmgard Neumann, and his granddaughter, Toni Neumann, the daughter of Max.

After intensive research, all the heirs to Ilse Neumann were recently found and an amicable solution for the sale of the "Netzflickerinnen" was found with them. In the course of negotiations with one of Toni Neumann's heirs, he also entrusted Koller Auctions with the "Portrait of the businessman Robert Neumann" for sale. The portrait of the great-grandfather was still in the family's possession and has now made the journey across the Atlantic a second time.

We would like to thank the Kunstmuseum St. Gallen for references to the Neumann Collection.