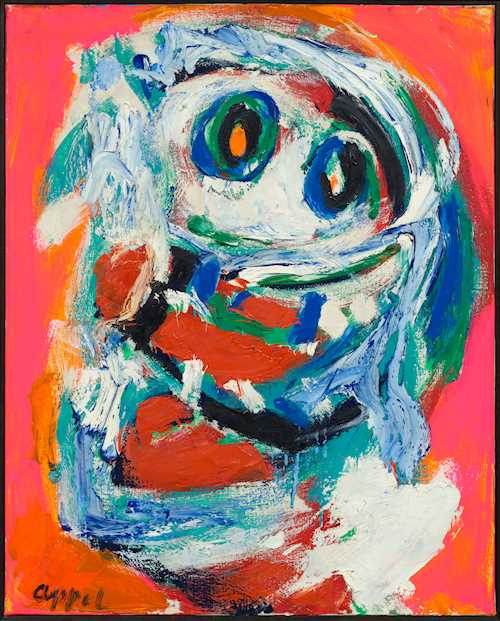 Sold for CHF 94 240 (including buyer’s premium)
All information is subject to change. 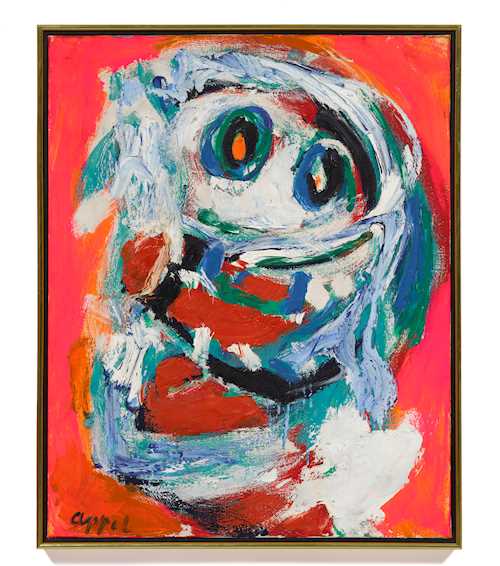 The Dutch artist Karel Appel was one of the most important artists of the post-war period and for a long time had the reputation of being its enfant terrible.

The present painting, “Smiling in the Ping”, dates from 1964. By then Appel was spending most of his time in New York, getting to know the Abstract Expressionists, whose influence on the Dutchman's artistic expression is undisputed. Like many artists of the time, he was influenced by the experiences of the Second World War. These artists responded to the shocks of this period with a hitherto unknown gestural freedom and radicalism. The boundaries between figuration and abstraction blurred.

Against a red neon background, a figure emerges, rendered in an impasto of quickly applied, bold brushstrokes. The round shape suggests the idea of a head, and then it is only a short distance to also recognise the large, round eyes staring at us ... and does a grinning mouth open underneath, as the title promises?

This insight when contemplating the work, powerfully elucidates Appel's artistic approach: "Appel's concept of art is individualistic rather than social, and focuses on the effect of the work of art on the viewer's imagination after it is created by the artist rather than in a participatory creative act [...]" (Ottmann, Klaus: Karel Appel. A gesture of colour. Paintings and sculptures, 1947-2004, Munich 2016, p. 15).

Sold for CHF 94 240 (including buyer’s premium)
All information is subject to change.