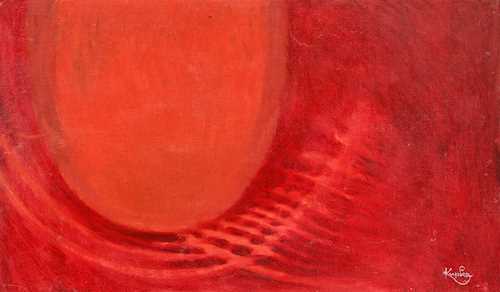 Sold for CHF 2 040 800 (including buyer’s premium)
All information is subject to change. 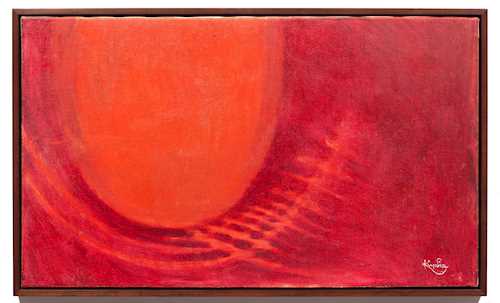 Provenance:
- Estate of the artist.
- Galerie Karl Flinker, Paris (label on the reverse).
- Private collection New York, acquired from the above gallery between 1964 and 1965 and by descent to the present owners.

From Prague via Vienna, Frantisek Kupka arrived in Paris in 1895, where he initially kept his head above water as a fashion designer, illustrator and caricaturist. Finally, he moved to the Parisian suburb of Puteaux, where he settled as a loner, deliberately away from the hustle and bustle of the Parisian art scene. His wide range of interests — he was intensively occupied with the colour studies of Isaac Newton, the manifesto of the Futurists, the latest technological inventions or the harmonies of Johann Sebastian Bach — provided inspiration for his art, in which form and colour dominate first and foremost.

Kupka never considered himself part of any particular artistic movement and is often mistakenly referred to as a Cubist or Neo-Impressionist, although he actually belongs to the founding fathers of abstract painting alongside Kandinsky and Mondrian.
In 1912 Salon d’Automne, Kupka exhibited a series of works with no subject, consisting of assemblages of vertical forms in sombre red and violet tones. These paintings – the first abstract works ever to be publicly exhibited – caused an enormous outcry among the public, and it is precisely this moment that can be considered the beginning of abstraction in France.

'Dominante Rouge (Le Rouge Emporte)' was created in 1913/14 and thus falls into one of the most creative and important phases in Kupka's work. The intensive use of the colour red, which immediately catches the viewer's eye, combined with the vibrating lines and outlines of circles, evokes the visual language of the great post-war artists such as Mark Rothko or Serge Poliakoff. Frantisek Kupka was far ahead of his time and the essential importance of his revolutionary, intellectual art as a forerunner for an entire century of artists has only been properly appreciated by historians and the art market for a few decades. The present painting is one of his very early abstract works, which makes the painting even more rare.

Sold for CHF 2 040 800 (including buyer’s premium)
All information is subject to change.