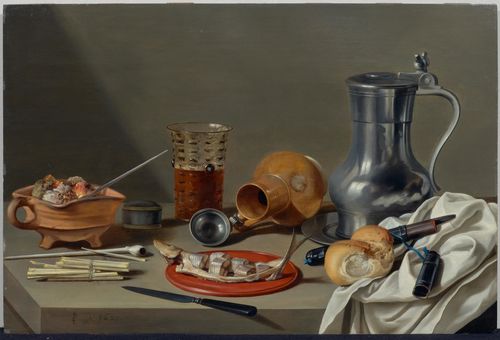 Haarlem was among the most important art centres in Holland during the early 17th century. Many artists emigrated from Flanders to the Netherlands at this time, whether because of their Protestant beliefs or due to the poor economic climate there, attracted by the commercial prosperity and growing affluence of the Dutch, particularly in Haarlem. Along with textile manufacturers, breweries were especially successful, and beer was the most common drink, since drinking water was often contaminated at this time. The favourable economic conditions stimulated the rise of a prosperous middle class in Haarlem, ultimately creating a significant consumer base for the arts.

Banketje still lifes, which typically depict a meal amidst an arrangement of tableware, were a speciality of Netherlandish painting during the Golden Age, particularly in Haarlem, and were in great demand during the 17th century. The large museum-quality work offered here, which has not been available for public viewing for quite some time, belongs to this category. It is also of the toebackje, or smoking requisites variant, and this paraphernalia is depicted alongside a large pewter flagon on a plate, a knopped beer glass, a sliced herring, bread and a knife, all arranged on a table. Particularly interesting is the monochrome tonality of this work, composed primarily of brown and grey tones and uniquely articulated through dramatically staged light. This reduced palette is a particular characteristic of Claesz.’s Haarlem still lifes. The depiction of the smoker’s requisites is considered to be an artistic invention of Claesz.’s, as these motifs first appeared in his work as early as 1622 (Brunner-Bulst, ibid., no. 4, pp. 207-208).

The combination of smoking requisites with the eating utensils of a banketjes still life, as in the present work, appears in two other smaller-format works by Claesz. from 1627: one is presently in San Diego’s Timken Art Gallery (36.2 x 57.5 cm, oil on panel, ibid. no. 28), and the other (the composition of which also includes onions) is in a private collection (ibid., no. 30, 37.5 x 47.5 cm, oil on panel).

Dr. Martina Brunner-Bulst, who has examined the present work in the original, selected it to illustrate the frontispiece of her catalogue raisonné on Pieter Claesz., thus eloquently expressing the importance of this work within the artist’s oeuvre.