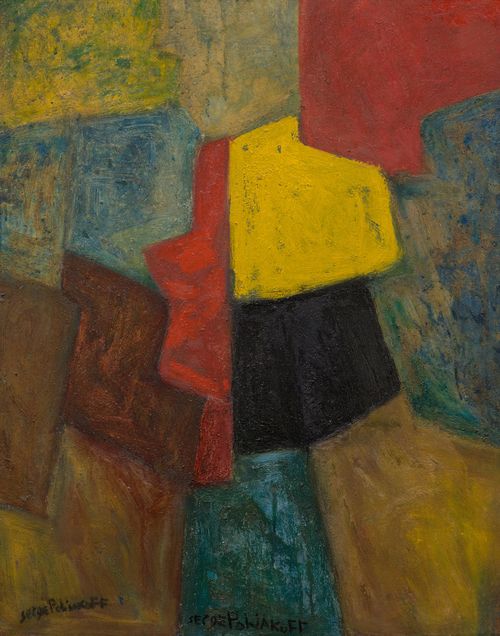 Provenance:
- Auction Galerie Koller, 19 November 1978, lot 5331.
- Acquired from the above by the present owner; since then privately owned Switzerland.

Serge Poliakoff was born in 1900 in Moscow. He fled at the age of 18 from the October Revolution in Russia and having travelled through Kiev, Tiflis, Sofia, Belgrade, Vienna and Berlin, he arrived in 1923 in Paris where he settled. As he had studied music, he started playing guitar to earn a living, but quickly turned to art and set out to learn painting, first at the Académie Frochot, then at the Académie de la Grande Chaumière. In 1931, Poliakoff took part, for the first time, in a group exhibition at the Galerie Drouant; he then spent the years from 1935 to 1937 in London where he attended the Slade School of Art. The innumerable international exhibitions at which his impressive works were shown give evidence of the great recognition he gained as from the 1960s.

Poliakoff started with figurative painting, but he progressively turned to Abstract Art when he met Sonia and Robert Delauney and Wassily Kandinsky. However, he was above all influenced by Otto Freundlich, with whom he had forged bonds of friendship and whose colour compositions fascinated him; it was during that period that he developed his own unmistakable two-dimensional colour works, the so-called Poliakoff’s “Colour chords (compositions)”. From the outset, Poliakoff utterly dissociated in his works colour from any figurative, respectively any representational, form; his concern lay more in the dynamics as well as in emotion. Based on his music studies, he applied two different composition principles in his works, which can be compared to polyphony (music in which several different tunes are played or sung at the same time) and homophony (accompaniment chords are subordinate to the main voice) in music. In the early 1950s in particular, Poliakoff first produced monochrome works in which he densely painted the colour fields with different nuances of the same colour. At the same time, he experimented with the juxtaposition of many different adjoining colours.

The present work, dating back to the mid-1960s, belongs to the works that were reworked a second time by Poliakoff, and this is the reason why they have been signed twice. The vibrant yellow surface, slightly off-centre, dominates the work and emerges again and again in other colour-fields. This illustrates clearly the artist’s characteristic modus operandi: he applies various layers of superimposed colours, so that almost no clear colour-fields appear, but as we watch the painting, we progressively discover an increasing number of different colours. This is how, in spite of abstraction, Poliakoff achieves a coherent composition. Red is another dominant colour in this work which limits the composition at the top right and can be discerned diagonally across the picture. The artist creates thus a diagonal that governs the whole composition, on which the other colour-fields are aligned. These colour-fields, which are never completely symmetrical, nor completely geometrical, confer to the painting its strong dynamic.

Sold for CHF 216 500 (including buyer’s premium)
All information is subject to change.