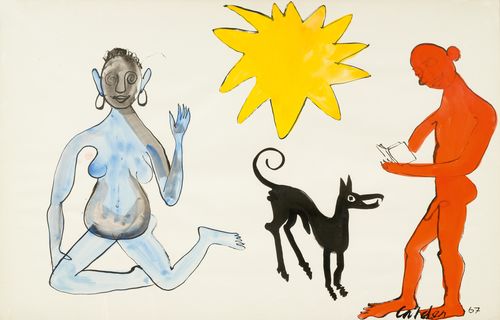 Alexander Calder was born in 1898 in Lawnton, Pennsylvania to a family of artists. Both his grandfather and his father were successful sculptors and his mother a portrait painter. Very early on, Calder began to make sculptures and objects out of wire. During his youth, the family often moved house, from Arizona to California, Philadelphia and New York. In 1915 Calder finished high school in San Francisco and decided to study engineering at the Stevens Institute of Technology in Hoboken, New Jersey. On completing his studies, he held various jobs as an engineer and travelled throughout America before finally deciding to become an artist, and to study in New York at the Art Students League.

In 1926 Calder moved to Paris and enrolled at the Académie de la Grand Chaumière. Here he met, amongst others, Fernand Léger, Hans Arp and Marcel Duchamp. When sailing to New York in 1929, he met Louisa James, grand-niece of Henry and William James, and married her in 1931. They settled in Roxbury, Connecticut, and started a family. As early as 1943, the Museum of Modern Art in New York held a retrospective of Calder’s work – a great honour for such a young artist. In 1955 Calder travelled with Louise to India, where he produced nine sculptures as well as jewellery. In 1963 he moved into a studio in Indre-et-Loire in France and in 1966 he published his “Autobiography with Pictures”. Calder died unexpectedly in 1976, shortly after the opening of a large retrospective at the Whitney Museum, New York.

Calder was fascinated by the circus from very early on, and in 1926 he made his first mechanical toys. His “Cirque Calder” consists of miniatures made of wire, fabric, corks, string and other found objects was just on view at Tate Modern. This sizeable work was exhibited in America and Europe and met with the approval of the Paris avant-garde in particular. In this period he also produced his wire pictures, which were exhibited in Paris in 1929. A visit to Piet Mondrian’s studio in 1930 influenced him greatly and from then on turned his attention finally to abstraction. Shortly afterwards he experimented with the first kinetic works, which were driven by motors and cranks. These pieces were seen as the first works of art liberated from the traditional notion of the work of art as static object. In 1931 Marcel Duchamp named Calder’s works “mobiles”, and in 1932 he began to suspend his works, which would move in the wind or when touched. In 1934 there followed outdoor works which would be “driven” only by the wind. At the same time, he also experimented with static, abstract sculpture, which Hans Arp called “stabiles”. After the Second World War, Calder increasingly used sheet iron, which he cut into pieces and painted in the now-famous colours of black, red, white and blue. In 1946 his works, almost exclusively hanging and standing mobiles, were shown at the Galerie Louis Carré in Paris. These had a great impact, together with the catalogue text written by Jean Paul Sartre. Although he is famous today for his sculptures, Calder painted throughout his artistic career and also made prints. His painting style became progressively more abstract over the years, the forms increasingly geometric and often with the appearance of movement.

In the 1960s, although Calder worked predominantly with abstract forms, figural depictions would appear now and again in his drawings, as impressively demonstrated in the present example. Despite the use of motifs from earlier works, the colour palette with its blue, red, black and yellow, as well as its flatness, clearly indicate that this is a watercolour from the 1960s. This sketch-like, humorous drawing is evocative of the early circus drawings of the Cirque Calder.