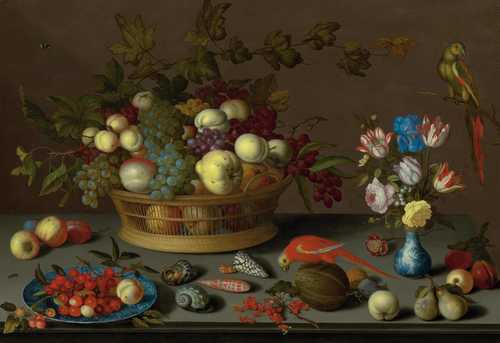 This still life by Balthasar van der Ast, because of its quality as well as its large size, is a masterpiece of Dutch painting of the 17th century. The extraordinary variety of objects depicted in the finest detail, including fruit, flowers, seashells, ceramics, insects and exotic birds, demonstrate the artist’s ability to create a still life from each individual object. A work like this would in fact have served as a showcase for the artist’s wide range of talents, so that a prospective client could use it as a source of possible elements for the painting he requested. That this representative and large work should have traversed four centuries and remained in such impeccable condition classes it amongst the highest rarities.

Balthasar Van der Ast is one of the most important Dutch still life painters of the 17th century. His contribution to this genre consists of approximately 200 large and small format paintings, characterised by their finesse and subtlety. The present work is a typical example from his Utrecht period, where settled in 1619, and during which time he began to distance himself stylistically from his brother-in-law and teacher, Ambrosius Bosschaert the Elder (1573-1621). Utrecht at the time must have been a highly stimulating environment for the young Van der Ast. Not only had Roelandt Savery (circa 1576-1639) settled here upon his return from Prague, but soon Bosschaert the Elder’s three sons, Ambrosius the Younger (1609-1645), Johannes (1608-1629) and Abraham (1612-1643) would move from Middelburg to Utrecht, making the city a new centre for still life painting from 1620 on.

The pervading motifs in the present work are a direct result of the widespread fascination in Holland at this time for the Exotic, kindled by the Dutch East India Company’s newly developed trade routes to the Asian continent. Some examples of this are the seashells depicted here: from left to right, a West Indian cittarium pica with a hermit crab, an orange-flecked mitra mitra, a small golden conus aurantius and a marbled cone shell, one of Van der Ast’s signature elements and highly prized by Dutch collectors. The two parrots, which were considered curiosities in the 17th century and possessed only by wealthy families, also add an exotic and luxurious element to the composition, as does the Wanli porcelain vase to the right of the painting. Similar vases can be found in approximately fifteen small-format still lifes by Van der Ast from the 1620s, none of which can be traced to a specific prototype, as the artist constantly varied the vases’ decoration.

The floral arrangement in the present work is comparable with the somewhat later composition “Flowers in a vase with seashells and insects”, in the National Gallery, London (inv. no. NG6593, oil on panel, circa 1630, 47 x 36.8 cm). This motif was apparently inspired by the numerous floral bouquets in Wanli vases painted by Van der Ast’s master, Ambrosius Bosschaert the Elder, for example a composition from 1619 in the Rijksmuseum, Amsterdam (inv. no. SK-A-1522, oil on copper, 31 x 22.5 cm). In contrast to the work of Bosschaert, more concerned with an artistic rendering of nature, Van der Ast endowed a feeling of elegance and intimacy to his paintings, expressed in the work offered here in an exemplary manner.