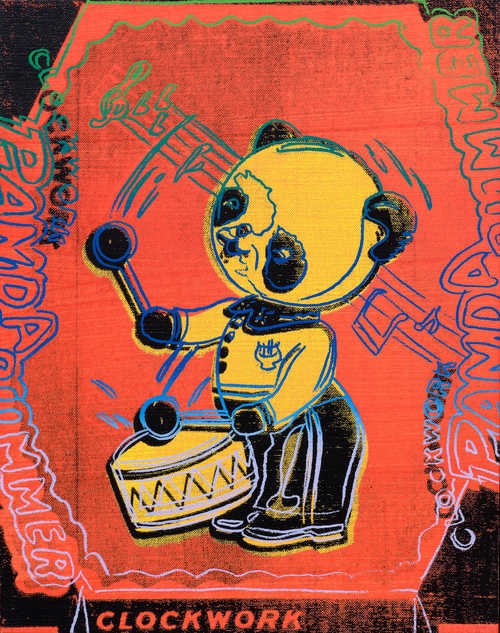 The present painting “Clockwork Panda Drummer” belongs to what is known as the “Toy Series”, which Andy Warhol began in the early 1980s at the suggestion of his gallerist Bruno Bischofberger. The idea was to make something for children, and since Warhol himself had a large collection of toys, it was obvious that he would use these as models. Parts of this collection comprised wind-up metal toys, which can be bought today as vintage toys. The packaging was the key factor for the artist, as we know already from his “Brillo Boxes”. It was well known to those around him that Andy Warhol was very fond of children and spending time with children gave him a lot of energy and creativity. He was also unable to hide his own child-like character in his work.

The small black and white panda stands in the centre of the painting, carrying a drum in front and swinging the drum sticks. Around him float a couple of notes and lines of music, to make the music “audible” to the viewer. The work is striking for the glaring colour of the background which contrasts with the restrained colours of the drawing, so that a harmonious composition emerges.

Sold for CHF 192 500 (including buyer’s premium)
All information is subject to change.