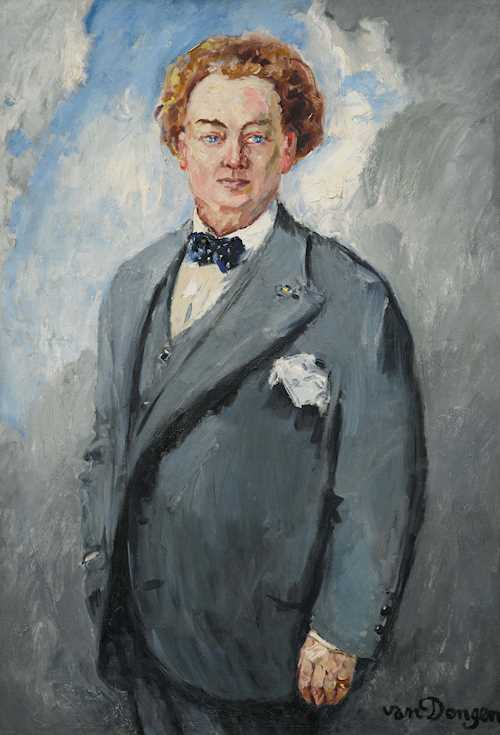 Kees van Dongen is one of the most famous portraitists of his time. By painting diverse people of all social strata, Van Dongen became a chronicler of the 1920s and 1930s. Through his expressive representations and powerful choice of colours, he received important recognition, and even celebrated international success during his lifetime.
In the present work, the artist portrays the great and equally famous Dutch conductor Joseph Willem Mengelberg in 1938.

Born in Utrecht, Mengelberg received piano lessons at an early age due to his musical parents. He studied piano, composition and choral and orchestral conducting at the conservatory in Cologne, where he already began winning his first prizes. After three years, Mengelberg left Cologne and moved to Lucerne, taking over the role of music director. He led the orchestra as well as various choirs, taught and accompanied musicians and singers on the piano. Under his direction, all ensembles were able to improve their technical and musical levels in a surprisingly short period of time.

In 1895 he was recruited by the Netherlands and offered the post of conductor of the Concertgebouw Orchestra in Amsterdam. At the young age of only 24, Joseph Willem Mengelberg took over the direction of the orchestra, where he remained conductor for nearly 50 years. With his style and manner, he decisively shaped the symphony orchestra and made an immense contribution to the orchestra’s development to an outstanding level. During his tenure, Mengelberg himself was greatly revered and internationally celebrated.

As he continued giving concerts in Germany during the Second World War, due to his belief that art and music exist for everyone and should stand above politics, the Netherlands imposed a life-long ban on him in 1945. Mengelberg became long forgotten. Thanks to Riccardo Chailly, who organised a commemorative concert on the occasion of the 50th anniversary of Mengelberg’s death, his achievements in the Dutch music scene and his musical legacy were once again honoured.