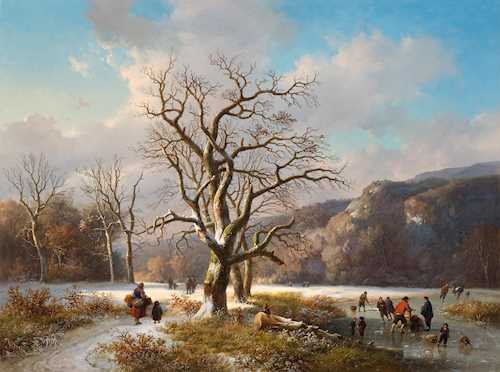 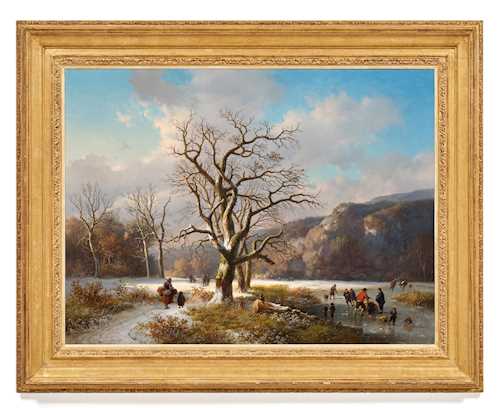 The present winter landscape with its busy narrative quality by the painter Louis Pierre Verwée, is a typical work of the Dutch Romantic period and captivates the viewer with its distinctive atmospheric representation of the landscape and use of a rich colour palette of grey and light blue tones. Well-chosen details serve to enliven the composition and invite us to linger.

Fully in the tradition of the Dutch genre of winter landscapes and "Eisvergnügen" (figures skating or enjoying the ice) this work refers to the little ice age which prevailed in Europe towards the end of the 16th century until around 1885 and was taken up and employed to great effect as a leitmotif by numerous painters in the 19th century, such as Andreas Schelfhout (1787–1870) and Barend Cornelis Koekkoek (1803–1862).

Verwée first studied at the art academy in his hometown under Jean-Baptiste de Jonghe (1785–1844). He then studied in Geneva at the studio of the well-known animal painter Eugène Joseph Verboeckhoven (1799–1881), with whom he was to have a lifelong friendship. He returned from his numerous trips abroad armed with a great variety of impressions which had an impact on his artistic work.

Sold for CHF 20 000 (including buyer’s premium)
All information is subject to change.