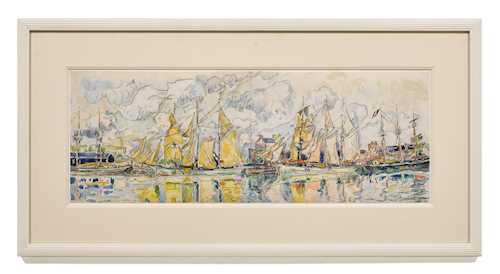 Paul Signac has masterfully captured the atmosphere at the port of St. Malo. The popular town in Brittany lies on the Atlantic Ocean and is known for its large and important port. Historically considered an important trading and seafaring town, St. Malo today has become a popular tourist destination due to its long sandy beach, seaside location and beautiful old town surrounded by a city wall.

Paul Signac's fascination for the sea can be seen in many of his works — including the watercolour from 1931 offered here. Large, three-masted sailing ships lie at anchor in the harbour waters before St. Malo. The sails of the two boats in the centre of the picture are stretched — as if just returning from a tour or setting sails for departure. The bright, vibrant colours of the sails are reflected in the clear surface of the water, the warm yellow of the textile mixing with the cool blue of the water. The rest of the scene is also reflected in the water. While Signac has created a dynamic sense of movement within the composition, he has nonetheless imparted the scene with a sense of harmony. Thus the artist has successfully captured the Mediterranean mood of the moment and artistically transferred it onto the paper through energetic brushstrokes and fresh watercolours.

Although maritime scenes are a popular subject in Signac's oeuvre, the Post-Impressionist’s late work offered here, with its special format, stands out among the artist’s body of work. By arranging two sheets in a row, the artist has created a picture width of 75 cm, lending the scene a sense of impact and further underscoring Signac's love of the sea.