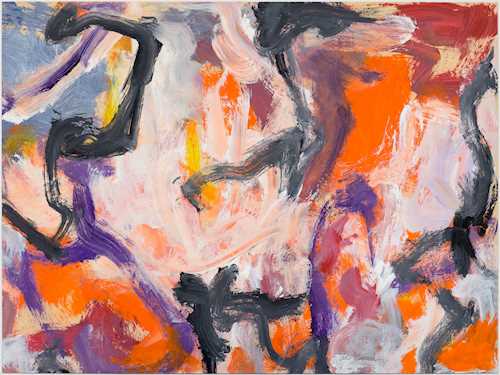 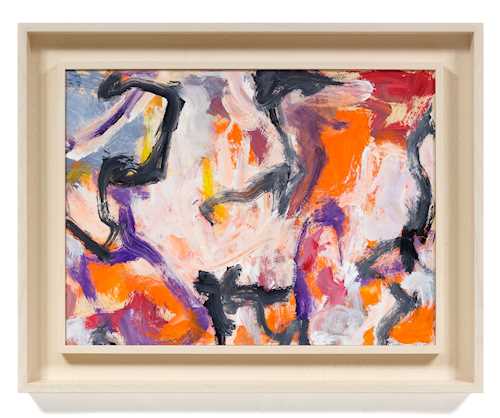 Willem de Kooning was born in 1904, the youngest of five children. His father, a wine merchant and drinks manufacturer, left the family two years later. The young Willem grew up with his mother, who worked as a barmaid on the harbour in Rotterdam. Probably due to the ever-changing male acquaintances, he developed a kind of love-hate relationship with his mother, which was reflected in his ambivalent portrayal of women in his later artistic work.

In 1916 he began an apprenticeship as a graphic artist, in 1920 he became an interior decorator at the Cohn & Donay department stores and, influenced by the emerging De Stijl movement, attended evening classes at the Academie voor Beeldende Kunsten en Technische Wetenschappfen, graduating as a Masters student in 1924. He used the following two years to travel in Belgium and The Netherlands, visited the art academies there and in 1926 decided to leave Europe for America. He arrived in the States as a stowaway on a freighter, but only obtained his American citizenship in 1962. At first, he just about made ends meet as a craftsman, but in 1927 he moved to New York and worked there as a commercial artist. This new life in the USA and the flourishing art scene in New York led the young painter to make a fresh start in his understanding of art. Bolstered on the one hand by his studio partnership with David Smith and Arshile Gorky and, on the other, by the opportunity to participate in the WPA, the major support package for artists of the Roosevelt government during the Great Depression, de Kooning devoted himself completely to painting in the mid-1930s. In 1948 he had his first solo exhibition at the Charles Egan Gallery, Josef Albers invited him to teach at the Black Mountain College, the Museum of Modern Art made a purchase, and in 1950 Alfred H. Barr, the legendary founding director of MoMA, recommended him for participation in the 25th Venice Biennale along with Jackson Pollock, which marked his international breakthrough. The initial friendship with Pollock eventually turned into rivalry, which was, however, very fruitful for the artistic output of both artists.

Having moved to Springs in the late 1950s, in 1957 he devoted himself exclusively to abstract-expressive landscapes and distanced himself from the otherwise dominant theme of the female nude until around 1963. The great success of his exhibition of landscapes with Sidney Jannis led to an invitation to the II documenta. After relocating and extensively remodelling his studio, in the mid-1960s de Kooning turned again to the "Women" paintings, which this time, however, were closely related to his landscape paintings. In 1964 he was awarded the Presidential Medal of Freedom and took part in the III documenta. Willem de Kooning, who was then in his 60s, was very preoccupied with the emerging Pop Art. He could not relate to it and struggled to appreciate the new, young art movement. At the same time, he was concerned about his own career. The 1970s were marked on the one hand by great artistic energy and creativity, but, on the other hand, by his increasing alcoholism and its consequences. At the beginning of the 1980s, de Kooning was diagnosed with Alzheimer's disease, which then progressed rapidly so that, despite his continuing creative energy, he was completely dependent on the help of his assistants. Willem de Kooning died in 1997.

Having made the acquaintance of Franz Kline and Jackson Pollock, the young Willem de Kooning turned increasingly to abstraction and discovered a path that was very much his own. Unlike his fellow painters of the newly emerging Abstract Expressionism, Willem de Kooning never completely banished the figurative from his oeuvre. On the contrary, it is always a constant, if not always clearly identifiable, component in his work. Although always classified as an Abstract Expressionist, he vehemently refused to be categorised as belonging to any art movement. According to his understanding of art, he saw art and life as intimately interwoven and mutually dependent. For Pollock and Motherwell, amongst others, turning to abstraction meant absolute freedom and detachment from any themes, traditions, etc. This very freedom does not exist in Willem de Kooning's view. His entire, extensive work as a painter is basically dominated by two themes: women and landscape. The depiction of women runs through all his creative phases in a wide variety of ways. The early depictions of women in the 1940s are still committed to figuration. The influence of Picasso cannot be denied, but the beginnings of a turn towards abstraction are also clear. There are the comic-like women of the 1950s, characterised by their strong colours and expressive painting. Then, in the 1960s, one finds the Rubens-like women with clear sexual connotations, where the colouring is rather restrained. Towards the end of the decade, the bodies become more abstract, but the sexual representation more explicit.

His landscape paintings, on the other hand, are characterised throughout by an expressive painting style and a high degree of gestural abstraction. Only the titles help the viewer to identify the theme. Once this is done, however, the landscape begins to take shape in the mind's eye of the viewer.

The present untitled painting from 1973/75 belongs to a series of small-format works. Using dynamic, sometimes broad brushstrokes, the dominant colours of this dense, gestural composition are white, orange, red and yellow. The thin application of paint allows the different layers of colour to shine through to great effect, giving the work a three-dimensional quality. Broad black lines, reminiscent of de Kooning's sculptures of the early 70s, extend into the composition. Although at first glance they appear dominant, almost aggressive, the artist succeeds brilliantly in integrating these black lines perfectly into the composition as they wrestle with the coloured elements. The strong contrast and dominance of these elements give the entire composition its cohesion and dynamism.

The high degree of abstraction makes it difficult to assign a theme, and so it is hard to decide whether this is a pure landscape depiction, or whether there are "black figures" lounging in the landscape. It appears that de Kooning worked on this painting for an extended period of time, because in addition to the clearly visible signature, there are 2 others that were painted over during the working process.

Sold for CHF 534 300 (including buyer’s premium)
All information is subject to change.