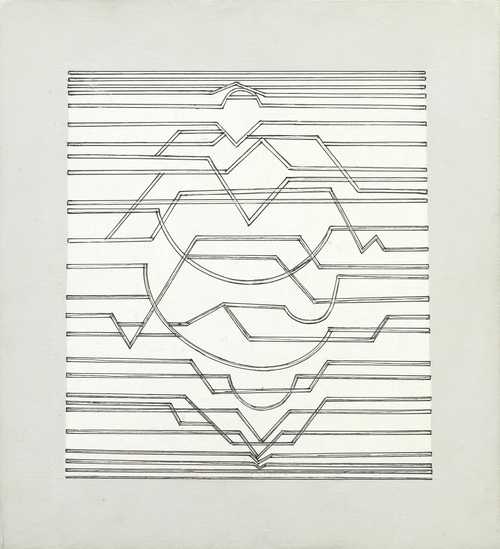 (Pecs 1908 - 1997 Paris)
Sans titre. 1955-60.
Oil, pen and pencil on board.
With the incised signature lower centre: VASARELY, also signed, titled, dated and numbered on the reverse: Sans-titre 1955-60 Vasarely 074.
34 x 31 cm.
The authenticity has been confirmed by Pierre Vasarely, Fondation Vasarely, Aix-en-Provence, April 2019. We thank Pierre Vasarely for his kind support.
This work will be included in the forthcoming "Catalogue raisonné de l’oeuvre peint de Victor Vasarely".

Provenance:
- Purchased directly from the artist by the first owner.
- Auction Sotheby's, Paris, 5 December 2012, Lot 127.
- Purchased from the above auction by the present owner.

This statement by Vasarely describes the decisive moment in which the artist underwent the transition from being a receiver to a creative agent, which in turn extended to his role as ‘giver’, whereby he created a response in those viewing his artworks. This interaction also defines in very precise terms the Op-Art movement of which Victor Vasarely is considered the founding father.

Before pursuing a career in art, the Hungarian-born Vasarely studied medicine in Budapest. In 1927 he broke off his studies and began a traditional painting course at the Podolni-Volkmann Art Academy, before he switched to the Mühely Academy in 1929. Here, while immersed in the Bauhaus-oriented style of teaching, he was able to pursue his interest in the connection between mathematical principles and artistic expression.

Initially, however, his reduced graphic style met with a positive response only in the advertising sector. After moving to Paris in 1930, he worked on numerous commissions as graphic designer and consultant for the advertising agencies Havas, Draeger and Devambez. In the process he discovered that, using geometric motifs, it was possible to evoke sensory responses in the viewer, which would convey new ideas on space, matter and energy.

Vasarely developed an independent geometric abstraction, with variations which lead to optical patterns with kinetic effects. The following decade finally brought him due recognition as a visual artist, after he exhibited his works at the “Salon des Surindependants” (1945 and 1946), the “Salon de Realités Nouvelles” (1947) and the renowned Denise René Galerie (1944 and 1948).

He enjoyed these initial successes with an abstract style, which in composition is somewhat reminiscent of the work of Le Corbusier or Piet Mondrian. Looking back, however, this phase of abstraction was a decisive stage on the way towards nonfigurative form. It shows Vasarely’s path to be a plausible development from reduction to a complete renunciation of figurative models. Victor Vasarely’s essential trust in the pure formal arrangement of the pictorial surface, was drawn not least from his profound understanding of geometric structures. On this basis he founded the movement which uses optical illusions in its compositions, today known as “Op Art”.

The small work presented here from 1955 to 1960 is an example of his reduction of form and colour, leading to a quite simple and yet effective interplay of thin black horizontal lines on a white background. The lines have been summoned from the calm of their well-ordered parallel state into a light dancing mesh. They cross, and each time the question arises as to which line probably overlaps the other, which is not immediately apparent. And if the viewer comes a little closer to the work, then the lines acquire a three-dimensional quality, since the artist has incised a fine thread along the line, probably with a ball point pen. This creates an active optical dynamic in the overall composition, which is highlighted by a light grey frame around the pattern of lines.
During the 1960s and 1970s Vasarely’s kinetic works were a part of popular culture and exerted a great influence over the art, architecture and fashion of that era. Two important exhibitions are taking place in the first quarter of 2019, “In the Labyrinth of Modernism” at the Städel Museum in Frankfurt, and an impressive retrospective “Le partage des forms” at the Centre Pompidou in Paris.