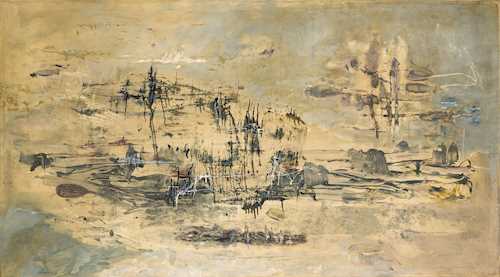 "The ambiguous expression ‘in-ein-ander-über’ (into one another) is the title of a key work by Gerhard Hoehme. This title goes to the heart of his art." (Gottfried Boehm)

Gerhard Hoehme was one of the most important exponents of abstract art and Informel in Germany after the Second World War. He developed one of the most idiosyncratic and multi-layered bodies of work known to German art in the second half of the 20th century.

Before Gerhard Hoehme started making art, he was a fighter pilot in the Second World War. His enthusiasm for flying later had a strong influence on his art. At the age of 28, Gerhard Hoehme briefly studied painting at Burg Giebichenstein in Halle and then spent a couple of years at the Düsseldorf Art Academy. In 1960 he went to Rome on a scholarship from Villa Massimo, where he made the acquaintance of Cy Twombly. His encounter with Jean-Pierre Wilhelm brought him into contact with the most important exponents of Parisian Informel, Jean Fautrier and Jean Dubuffet. From 1960 to 1984 he was professor of painting at the Düsseldorf Art Academy, with students including Sigmar Polke and Chris Reinecke. Gerhard Hoehme was a member of the Deutscher Künstlerbund, serving on its board from 1961 to 1963.

As an artist Gerhard Hoehme worked the paints with a wide variety of utensils, spatulas, brushes and drip moulds. He himself described his painting as constantly changing over the course of its production. He would paint, overpaint, remove, only to paint it over again. The canvas was his colour palette, on which he mixed colours to create new ones. Broad brushstrokes, as well as fine drops of the most diverse hues, origins and effects are overlaid, creating an ensemble that grows into one of pictorial clarity.

In the present work 'Schwebendes Blau' (Floating Blue) from 1955, we can easily recognise his scientific coolness and impulsive directness, which is very characteristic of the works from the 1950s. As viewers, we are presented with a work that gives the impression of bringing together very different worlds, as if several levels are converging. One wonders where the threshold between what is represented, and the level of representation begins or ends. This makes the question of the distinction between the real and the fictitious almost inevitable. The contrast of the colours, the different levels, and the states of aggregation bring about an interaction and awaken our powers of imagination; the viewer makes certain connections or even takes ideas further. Do we perhaps see a landscape from an aerial perspective, an island emerging in a sea of fog, a photomicrograph of a cell?