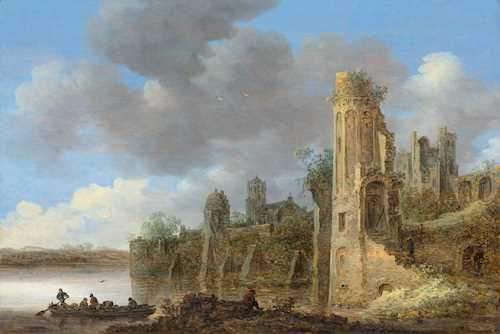 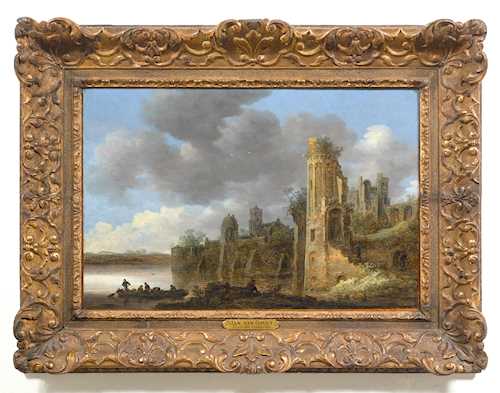 This painting, recently uncovered in a Swiss private collection, of a river landscape with ruined castle, a subject which was taken up by Salomon Ruysdael (circa 1600–1670) as well as Van Goyen and which was presumably located in Gorinchem (also called Gorcum) (see Stechow 1975, p. 51), both for reasons of composition as well as painting technique, fits convincingly within the oeuvre of Jan van Goyen. The work bears witness to van Goyen’s mastery of the natural colour scheme of green, brown and yellow and his eschewal of hard contours. With his monochrome landscapes Jan van Goyen’s style contributed significantly to the realist approach to Dutch landscape painting and greatly influenced contemporaries, such as Salomon van Ruisdael and the young Aelbert Cuyp (1620–1691).

Van Goyen specialised in the depiction of landscapes, in which he enlivened his motifs of villages, rivers, canals, beach and coastal scenes with simple rural figures engaged in everyday activities. From the 1620s onwards the artist focussed on diagonal compositions, incorporating architecture, landscape elements and figures. These included the recurring use of simple boats, often in the form of ferries full of passengers and loaded with cargo, which are set out as richly detailed genre scenes. As in the present painting, the figures served rather to suggest scale and less as part of a narrative.

Our thanks to Ellis Dullaart of RKD, The Hague, and Dr. Christiaan Vogelaar, who have confirmed the authenticity of this work on the basis of a photograph. They date the work to the 1640s when van Goyen produced a range of comparable compositions, characterised by a monochrome colour scheme (compare for example Beck 1973, No. 685, 686, 687 and 699), within which the impastoed style enlivens this fine work.

The painting is archived at the RKD, The Hague.