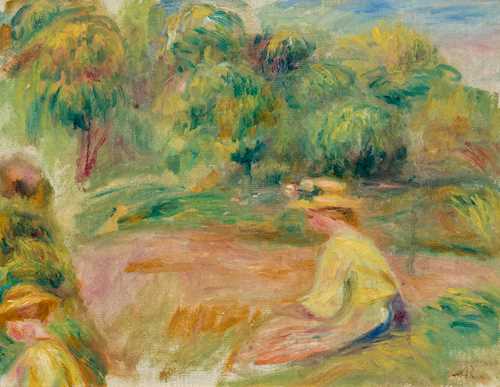 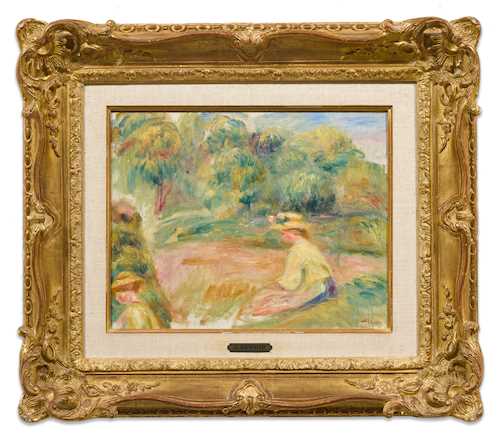 Characterised by a harmonious variety of colours, the present painting from 1915 is a fine example of Renoir's late oeuvre and has therefore been distinguished by Renoir experts as a particularly beautiful work by the artist.

In 1907 Renoir bought a house in Cagnes-sur-Mer and for the rest of his life spent most of the year with his family in the south of France. The mild Mediterranean climate was very good for the artist suffering from rheumatoid arthritis and he hoped the move away from the city would bring some relief from his ailments. Renoir was also fascinated by the landscape of southern France, the vivid colours and the light – he skilfully infuses his work with this atmosphere.

The scene depicted here shows two women seated in a typical landscape in the South of France. Warm, luminous colours dominate the picture, and Renoir's characteristic handling of paint, comprised of quick, fleeting brushstrokes, imbue the painting with a summery, gentle mood. As customary, the two women sitting in the grass are wearing hats — a favoured prop employed by Renoir and found in many of his portraits of women and figural depictions. At the time, hats were an essential accessory for a woman's appearance, and Renoir, with his preference for headdresses, thus adapted to the contemporary fashion. For a harmonious overall composition, the artist characteristically embeds the two figures in the present example in the sourrounding landscape. Individually contours in the work become blurred in this process and Renoir thus creates a calm unity between man and nature.

Accordingly, his works evoke a sense of something magical, lovely and idyllic, which is also echoed in our work. Renoir, who greatly admired the rococo painter Antoine Watteau, expressed his regard for Watteau’s dreamy depictions of nature: "One would be far more likely to believe in a Watteau landscape than in reality". (quoted in Venturi 1939, vol. 1, p. 126). We feel the same when we immerse ourselves as viewers in Renoir's pictorial world.