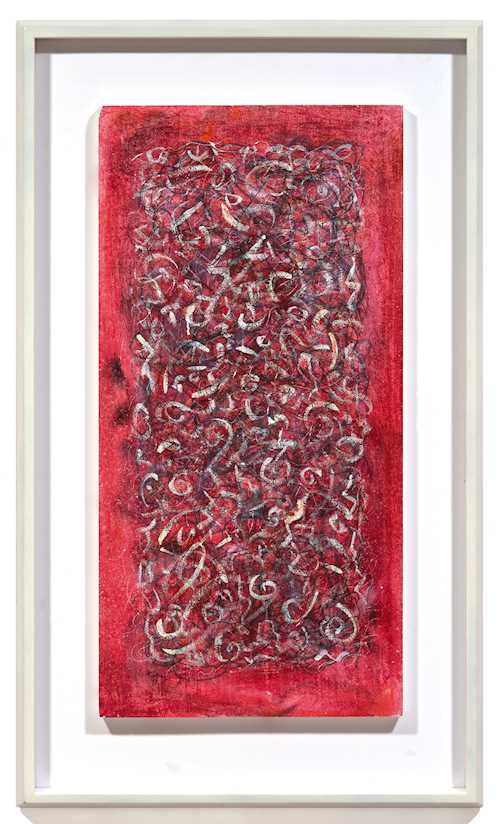 "I often think of Chopin when I work. From time to time I have ideas, sometimes I don’t have any at all. Ideas come to me in the course of my creative work. A composer, once he has as his point of departure a series of sounds he can compose an entire symphony." Mark Tobey

Mark Tobey, painter, poet, composer, and important pioneer of Abstract Expressionism, was one of the best-known American artists of the 20th century. His artistic world is complex and is characterised by an almost inexhaustible potential for creativity, love of experimentation and the power to innovate. With his distinctive approach to abstraction and fusion of elements of Western modernism with components of Far Eastern calligraphy, Tobey created something unique and extraordinarily radiant.

This magnificent work, created in 1969, features an energetic internal design with broad white, black and dark red flowing lines, all-over reticulated structures, and calligraphic swirls against a bold red background. For Tobey, the white lines in motion symbolise a unifying idea that flows through the subdivided units of life, bringing a dynamism to people's minds and constantly expanding their energies to a greater scale. In the complexity of its movement, optical rhythms and musical vibrations, the present work not only intensely challenges the viewer's subjective perception but invites them to embark on a contemplative journey. Painting on polystyrene - as in the work offered here - presented a particular challenge for Tobey due to the bluntness and resistance of the material. This unique composition reveals a wide range of Tobey's themes and interests: nature, civilisation, cities, movement, the sky and the cosmos, emptiness, and contemplation, as well as rhythm and music.