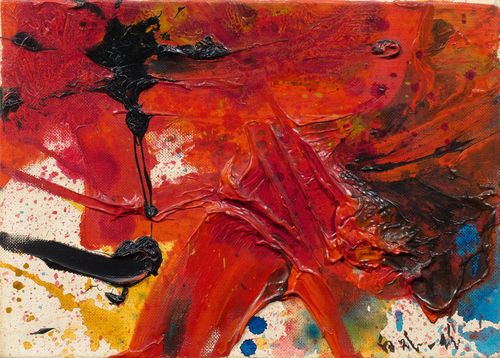 „We are following the path that will lead to an international common ground where the arts of the East and the West will influence each other. And this is the natural course of the history of art“. (Yoshihara Jiro, 1958)

After 200 years of self-imposed political and consequently cultural isolation, Japan re-opened to the West in the course of the 19th century. For Japan’s art, this meant that it was confronted with Western art, which was totally unknown to them and also very different from the artistic traditions of Japan. At first, this cultural opening led Japanese artists to imitate occidental art, which in their eyes had no negative connotation and was common practice. It was shortly after the Second World War that the artist Yoshihara Jiro declared the independence of Japanese Contemporary Art. Behind this claim lay, on the one hand, the encouragement to create something that had never existed before, and on the other hand, the demand to cease all imitations of western art.

Against this background, in 1954 a group of artists founded GUTAI, meaning “spontaneous, direct, capable of expressing, without reflexion and immediately, one’s own thoughts and feelings.” (cit. Barbara Bertozzi, in: Gutai exhibition catalogue: Japanese Avant-Garde 1954-1965, Mathildenhöhe Darmstadt, 24th March – 5th May 1991, p. 20). The first project with which they made their début was an open-air exhibition, which in itself was quite revolutionary. But their art was also far-sighted and alluded to the DADA movement: it was composed of happenings, performances in which the spectators could take part, and in which nature was included as well. All of this took place spontaneously, in an almost playful manner, without any concept, which stood in stark contrast to Japan’s strict, hierarchical society.

The interaction of occidental and oriental art is immanent; the material used by the GUTAI artists was to be found later in the works of Piero Manzoni and the Arte Povera. The impasto, dynamic and abstract manner of painting shows a close relationship to the European Art Informel as well as to the American Abstract Expressionism. Although the great Informel art critic, Michel Tapié, had much influence on the group through his numerous visits to Japan, namely with Georges Mathieu, and remained in close contact with them, the members of GUTAI nonetheless always referred to the American Jackson Pollock as the artist who most influenced their work. Due to their increasing international fame, GUTAI’s experimental techniques, happenings, etc. decreased in favour of oil painting; the demands of the art market and innumerable exhibitions, also in Europe, led to compromises and at the same time somewhat reduced their creativity. The admittance of new artists in 1965 rang up the curtain on a new GUTAI period.

One of the most famous artists of the first generation is Kazuo Shiraga, who became an official member of the group in 1955. In his first happenings, Shiraga takes the Action-Painting of Jackson Pollock extremely far, creating paintings with his feet or suspended on straps in order to soar over the canvas and be able to paint with his feet.

In the present, small-format work, the incredible energy with which Shiraga creates his painting is clear at first sight. The scattered, pastose surfaces show not only the dynamics of the work, but also the expressive and free creative process of the painting. The scattered, almost watercolour-like colour-fields seem almost to arise from the canvas. The colour of the canvas is thus included in the composition; red dominates the work, but with the black and blue forms a dense composition.

Sold for CHF 132 500 (including buyer’s premium)
All information is subject to change.