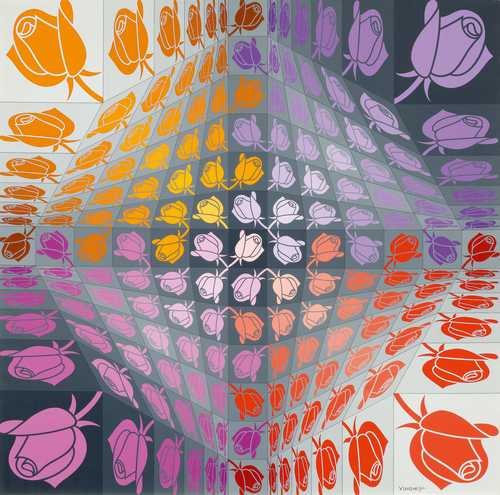 Victor Vasarely is regarded as the founder of Op Art, which arose in the 1960s as a counter movement to Abstract Expressionism.

Born in Hungary in 1906 and having studied graphic art under the influence of the Bauhaus, Vasarely, in his support of an easily accessible form of artistic expression, focused mainly on geometric compositions. His distinct knowledge of symmetry and colour theory enabled him to create polymorphic pictures with optical illusions which lead the eye through a playful visual arrangement.
The pictorial space which bulges forwards is a typical feature in Vasarely’s extensive oeuvre and underpins the work presented here at auction: “Piross-Bacc”.

It is rare, however, for Vasarely to include figurative elements in his strictly geometric patterns. The graphically reduced rose therefore constitutes an unusual compositional feature, which, on the one hand, dominates with its colour, and, on the other hand, through the precise distortion, is subordinated to the basic pattern. The resulting tension between geometry and graphic art is truly unique in the work of this Op Art pioneer.

Vasarely’s legacy in art history stands out, in that a number of contemporary artists, including Richard Anuszkiewic and Bridget Riley, openly proclaim their allegiance. Moreover, his presence in exhibitions and on the art market testify to his continuing relevance. Throughout his life Vasarely played a part on important international platforms, including the first four Documentas. Even today, 20 years after his death, there are numerous international galleries featuring monographic shows of his work and presenting him on a large scale at art fairs. His art is accordingly as widely disseminated as he himself wished in the following quote: “The art of tomorrow will be a collective treasure, or it will not be art at all.”